I hate November or at least I used to hate it…grey days, clocks just gone back and the Spring as far away as it can be. I am sure I suffer from that horrible disease one gets when one lacks sunshine. After the shocking summer, I am even beginning to believe my niece who is championing the fact that the government is spraying the atmosphere with chemi trails to cause more cloud and rain cover to counteract the effects of global warming.

This year though there is a ray of sunshine in my life and it’s called grandchildren. We see a lot of ours thankfully. Mia and Millie are frequent visitors to our place and we have the wonderful prospect of having them staying this weekend. They are beautiful little treasuries and the other little ray of sunshine is Alfie who I look after every Friday. I had already made my mind up that today I would continue Alfie’s education with a visit to the library in Cardiff.

When I saw the fine drizzle, which covered Wales this morning I knew I had made the right decision!

Alfie slept over as usual and very kindly that lady of the house had been up early bathing, dressing and feeding the little fella so when I blearily made my way down stairs to prepare the good lady’s first meal of the day and prepare her second one as well, he was ready, smiling and ready to go adventuring. Being with this little man has changed me.

’Have a good day today?’

Went to town with Alfie.

Not any more…What follows is what happens now…

When the lady of the house was safely out of harms way Alfie and I drove back home. We noticed that the traffic is always much lighter on a Friday. A lot of my friends ‘work from home’ on a Friday….so they say!!! I used to ask my headteacher if I could work from home from time to time and he always said the same…”No! You’ll never get thirty kids in your lounge Fatboy!’ and so in the end I gave up. I am still a little envious of those who are able to ‘work’ (term used very loosely) from home. Never mind life is tough sometimes!

When we got home we had a little play. After playing ‘farms’ last week we played ‘kitchens’ this week. Alfie had a little go pretending he was Heston Blumental.

The kitchen is a bit pink, but Alfie appears not to notice too much. He made me a delicious cup of tea and had a little go at a few simple recipes, before going off for his nine o’clock nap at more or less the right time…that seems such a good idea. He went straight down…good little fella! I looked in the mirror and was truly shocked…what a mess, messed up hair, face sporting a rubbish MOVEMBER moustache, bags under my bloodshot eyes, looking like they are packed for a 6 month holiday and when I yawned my breath offended me! I was about to do the dishes, but I thought a bit of personal hygiene was long overdue. I checked Alfie, he was sleeping peacefully, so I decided shower first and do the dishes afterwards!

Job done and now looking decidedly more handsome and debonair, I looked around for something to wear. I noticed that Alfie was wearing his gillet and as I had just bought one for myself from the few pennies the lady of the house had given me for my birthday, I thought we could go as the ‘Gillet brothers’. I am never sure how to pronounce the word… Is it gillet ( gi…as in what you say to horses to make them go and …llet as in café au lait) or is it gillet (gill..what a fish breathes through and let, rhymes with net)? You can choose but I’m saying gillet.

Alfie woke in good time to go for the 10.28 train and we made our way to Eastbrook Station. When I was there something happened which made me Iaugh out loud. All of a sudden a posh sounding bird announced that the next train to arrive at Platform One was the 10.28 to Cardiff Central and then apologised that it was not expected to arrive until 10.32. Three things…. firstly, since when has Eastbrook Station had a Platform One…secondly, since when has Eatbrook Station had a station announcer and where has she hiding? Thirdly, how did she know the train was four minutes late? Brilliant…The train actually came at 10.30 but I didn’t have the heart to tell her.

It was quite busy so Alfie had to stay in his pushchair much to his embarrassment! Alfie’s parents often forget we only possess a Barbie pushchair and when they forget to leave their stroller this manly little one year old has to spend the day pretending to be Barbie’s boyfriend Ken! Oh the shame… but he seems to cope OK.

We arrived in Cardiff and made our way to the library, but first we had to stop off at the Cath Kidston shop to exchange some presents that we had bought for Alfie’s great nan’s 90th birthday.

As I walked in through the door I noticed that this busy town centre store has almost as much Cath Kidston stuff as the good lady, who shares my life, has in our house!  Many people don’t know the existence of Cath Kidston, Dinas Powys.

The staff were as charming as ever and changed my things and made a big fuss of Alfie…he responded in his usual way! We then headed for the library and … 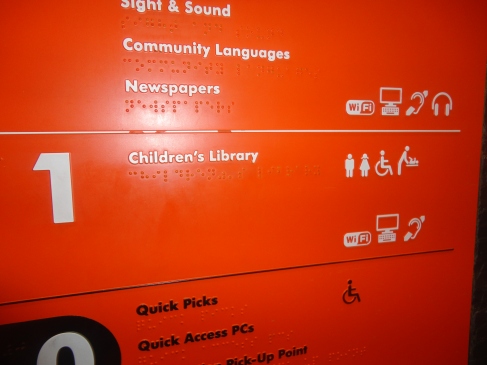 …what a great decision it was to come here! It was wonderful. I caught the tail end of the Friday story telling session and the kids’ area (they have a whole floor of the building to themselves!) was full of pretty young mums with their little darlings all playing with toys and reading books. I was in heaven; fortunately there were a few not so pretty young dads with their little offspring as well, so I did not feel totally out of place. Alfie simply adored it, I put him down and he was off! He was so good interacting with the other little kids, stealing their toys and getting his toys stolen by others. He would sit and listen as young mums read to their kids. I know Alfie’s dad and mum love to read to him and I could tell he was loving it. I sat and played with him and read to him… 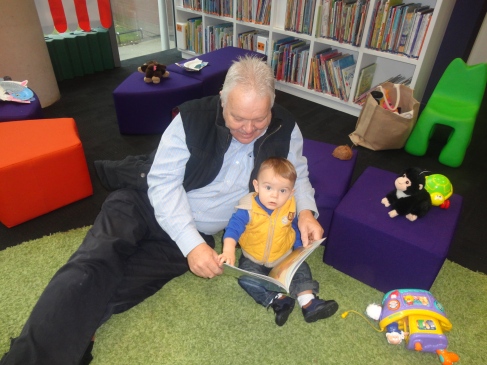 I was having the best time ever… so was my little buddy! I noticed thought that several ladies were peeping down the back of their little darling’s nappies, then shaking their heads and looking straight at Alfie. I got the message. No worries though; this little piece of heaven in our city centre had been thoughtful enough to provide a ‘grampy and toddler’ changing room, I did the business ( and so had Alfie…big time) and rejoined the group. Most had gone home when we reappeared. This gave Alfie the chance to explore a bit more and he found the windows, which reached, down to the floor. He loved this even more than the toys and books and sat for ages and ages looking out on to the entrance to the John Lewis car park. He loved looking at the people car and buses going past it was great! 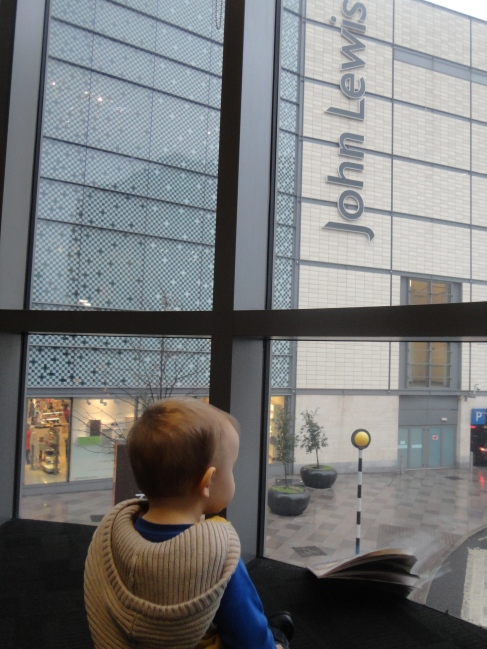 We could have stayed there till teatime but a library helper started tidying up and it was dinnertime anyway. After chatting to the assistant and finding out about next week’s story time and rhyme time – Mia and Millie get ready…you are coming next week – we made our way out. 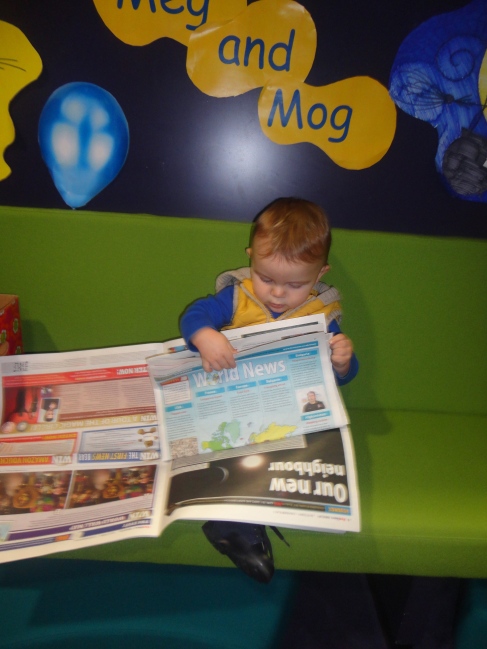 We thought we would visit Hamleys before lunch.  I have only ever seen one other Hamleys in Regent Street in London, but now we have one in Cardiff.

On the way be bumped into an old friend Nigel Moffatt with his daughter Sarah and his mum. He was visiting from Basingstoke. We had a great chat and took some photographs. 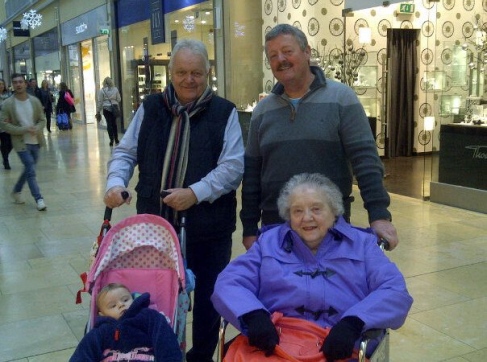 Nigel’s mum was in a wheelchair and I was tempted to challenge him to a race around St David’s Two. The Barbie puschair has excellent steering and I really fancied my chances…but thought better of it!

After saying our goodbyes, we went into the shop.

What a paradise for kids is Hamleys! Alfie loved it, especially this toy bird, which was massive, but it reminded me of the seagull, which hovers menacingly over the Hayes Island Snack Bar, so I moved him on quickly. 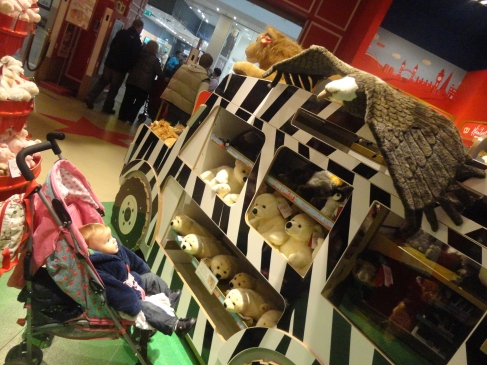 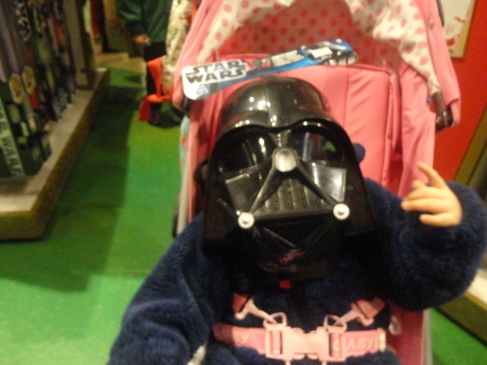 Near the door there was a toy elephant with a price label of £1000. I turned the Barbie pushchair quickly to the right, to avoid Alfie making eye contact with it! After a great look around and with my wallet firmly in my trouser pocket, we headed off for lunch at a familiar haunt, The Café Zest in House of Fraser.

We visited here once before and it was good today was even better. It was a bit later than last time, so the ‘Fifty Shades of Grey’ ladies (hair colour not choice of reading material!!) were nowhere to be seen and today the customers were decidedly younger. It was great, not too busy, high chair available and plenty of space. Alfie was happy to be having some food. I ordered my meal – jacket potato with prawns, mayonnaise and salad and a pot of tea. It was a good sign when not only did the tea come in a pot but it came with a little pot of hot water as well – without having to ask! My kind of shop… every time. When I asked a little nervously if they had a microwave to heat my grandson’s meal I was told ‘Of course!’ and the assistant even asked if I would like a china bowl instead of the old plastic one the meal came in. How kind is that?

Alfie ate like a king… tender lamb with steamed vegetables followed by rice pudding. They even brought it to my table when it was done and another little lady hovered around me, clearing dishes away whenever one became empty. After his meal Alfie played quietly with the lid of his bottle while I demolished the jacket potato. Stunning.  A group of five blue haired brigade ladies settled on the next table to us and as usual Alfie charmed them with his smiles and shouts. They made me laugh, as they all ordered a pot of tea and a scone and then halfway through they all decided that the scones were not very nice…so all five went to the counter to complain and all five were given toasted tea cakes in compensation. Funny how all five disliked the scones…turns out they were all from Swansea on a visit…enough said!

Alfie waved goodbye, five ‘over sixty’ Swansea Jacks waved back and we made our way back to the station, tired but so very happy.

On the return journey the train was quieter, so I got Alfie out of the Barbie pushchair and we looked out of the window together all the way home. He loves to do that…more shouts, more window banging…and more fun! 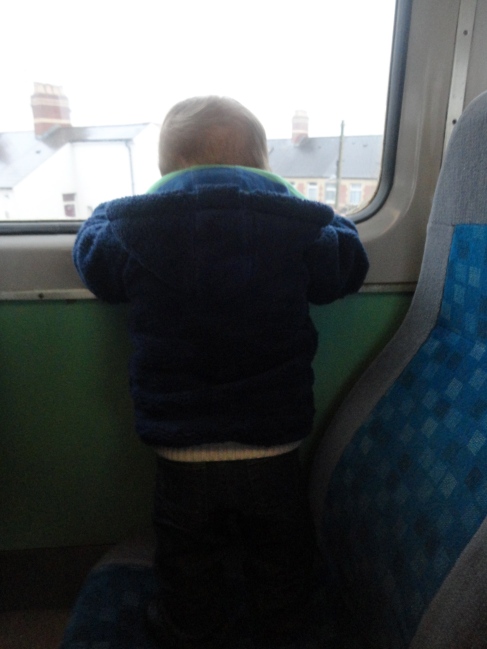 On the return journey we went on one more stop to Dinas Powys Station (Platform 2!!), as there had been a sighting of Alfie’s Noo Noo (comfort blanket), which he had lost the day before but sadly there was no sign. It was a long walk home and by the time we reached the end of our road the little man was asleep.