I went out with a young lady today… a very young lady…in fact a little angel. The lady of the house didn’t mind at all! 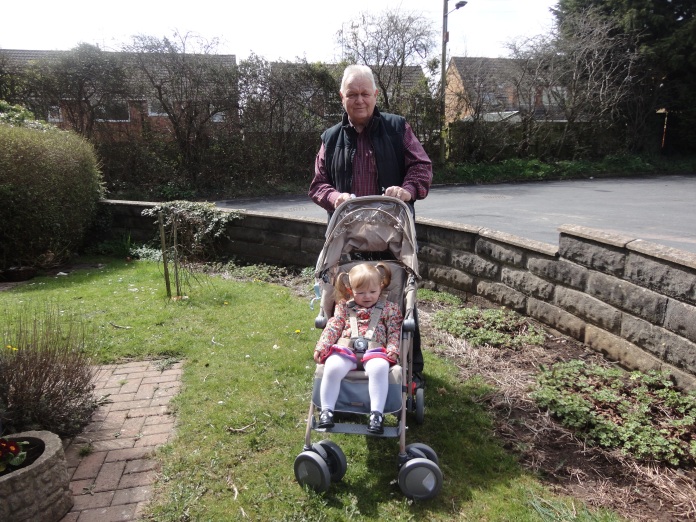 She and I were looking after Princess Mia and Angel Millie while her mum went to work as a supply teacher. Mia has to be in school, so Millie and I decided on a trip to the museum… just the two of us…friends together. It was going to be great.

The day started off so well, when cousin Alfie was bought over while his mum went off to run off a few pounds in the gym. What fun… the three grandchildren, all together at 8.30am on a Monday morning. How is that for a good start to the week!!

They played, ate breakfast and watched Disney films, all three side by side on our kids’ settee…  the lady of the house was fit to burst with excitement.  Alfie was collected just after 10, by his mum, who definitely had been to the gym, looking very hot and certainly a few pounds lighter.

Millie and I set off just after lunch catching the train into Cardiff. Our neighbours are having a new drive, but Millie wasn’t too interested as I tried to show her. Never mind!

There was a delay at the station, which did not bode well for our return some hours later.

Millie loved the train ride, looking out of the window, shouting and talking all the way. We got off at Queen Street Station and I showed Millie the renovations, which are taking place.

We strolled on, up passed The New Theatre and then across into Gorsedd gardens, just in front of the museum.

Gorsedd Gardens were established when the new City Hall was opened in 1905 and Cardiff declared a city It has as its focus the sandstone blocks of a druidic circle. The central altar stones, often used as a site for drunken prancing right up until the eighties, are now gone. The rocks of the Heritage Coast are still standing. They are not just an antiquarian artifact; the stones are nineteenth century quarryings from the cliffs of Penarth. They were used for real in 1899 when the Eisteddfod visited Cardiff and held its performances in a massive wooden shed erected where City Hall now stands. That was the Eisteddfod where the committee threw tradition to the wind and opened a bar on the Maes (Eisteddfod field); no poem was found to be good enough to win the chair; and on the last day the pavilion collapsed. The omens had all been bad.

The stones were moved when the City Hall foundations went in and it was agreed that they should become the centrepiece for a new public garden. There’s no celebratory plaque and their origins have been forgotten.

In the sixties Tom Jones, Wales’s macho rock and roll dynamo from Pontypridd, played the Cardiff Capitol and underestimating his attraction to the massed screamers ended being chased up Park Place and into the Gorsedd Gardens where he hid himself behind a weeping cherry. Happy days!

It’s the Cardiff park that gets the most foot traffic. You might think it would be Roath Lake, crammed with citizens any sunny afternoon or Bute Park, the vast swath of grass and trees that runs from the Castle to the Cathedral.

Gorsedd gardens have three entrances, two paths and some of the best-maintained flowerbeds in the city. These are seen daily by the thousands of workers who track from Queen Street, the station and the car parks, to the National Assembly Government, the City Hall, the Temple of Peace, the University, the Law Courts and the many other official centres of Wales.

In the gardens are statues of Lloyd George, high on his plinth, dripping green as his copper degenerates and John Cory – Coal owner and Philanthropist – silently facing the bushes and the bustle of traffic rolling, along Boulevard de Nantes.

We stopped to record the visit on camera and I chuckled as Millie let out a loud… ‘CHEESE!’ as she did every time I held the camera up. Some people were laughing as they sat enjoying the afternoon sun. 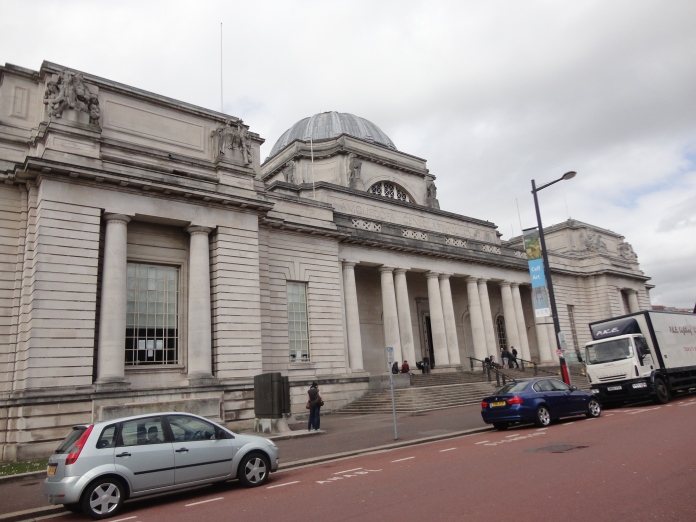 When we got to the museum, we were disappointed. There were some film crew lorries outside and as I prepared to climb the steps with Millie, a loud cry came to us and we were turned away, and we were told the museum did not open on a Monday.

We had no other option than to head for town and what else could I do when I take a young lady out other than take her for afternoon tea in Howells. We stated to make our way there.

As we turned to corner into Working Street there seemed to be a major incident taking place with an ambulance and a police car and crowd of people. A lady lay on the ground, looking the worse for wear. A group of buskers were miming and several people were speaking to police officers. 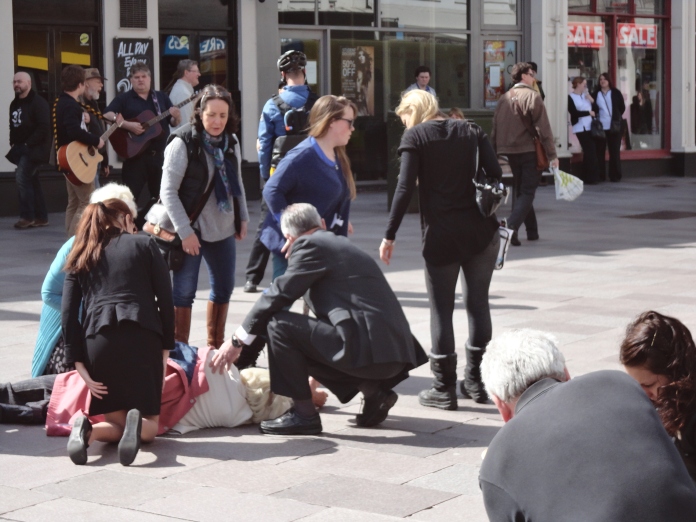 As it turned out the BBC were filming a scene for the series Casualty. We both watch fascinated. The director clapped his clapper board and shouted ‘Scene 120 take 2 ‘ and as the scene began there was a sense of quiet among the crowd, till a little voice shouted ‘CHEESE’ as the camera came into view. It was a beautiful moment, which I am sure will be edited out. There were several broad smiles from those around us.

We were determined to be extras come what may and I watched carefully for our chance. In another scene, as it started, Millie and I broke ranks and walked right across the ‘set’, although slightly in the background. They did not do a retake so I think we made it! If you watch Casualty, it’s the episode where and elderly lady with blonde hair  get’s knocked down and as the paramedics arrive and run to her, Millie and I will be seen walking from left to right near the ambulance!

We pushed on to Howells and detoured into the market. Millie refused to be initiated into the Cockle Lovers Club but loved looking at the fish. I also showed her the saltfish and told her of my childhood treats. 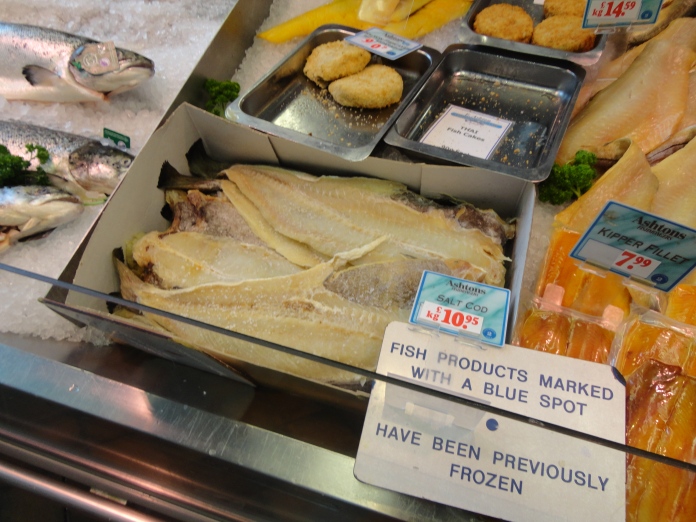 When we got to Howells, we had the kids’ area to ourselves and we enjoyed some quiet, quality time together, over a pot of tea, a pecan and raisin Danish and some oat biscuits.  The assistant put Peppa Pig on the television and we both loved this quiet but special little time together.

Millie played with the toys and read a few books before we made for home.

As I expected we were held up on the Central Station for a long time. The delays had been caused by a points failure in Grangetown, just the way we were headed. It did give us chance to look at the trains and I am sure Millie loved them as much as me. She was pointing and talking as they all came and left.

On the train ride home a young lady was fascinated by Millie and complemented her over and over for her cute looks and smiles. I was proud… very proud.

I looked at her and I thought again what a beautiful, gentle little soul she is. My little angel, thanks for a lovely day…

One thought on “Angel stories Chapter 2”