Adventure is out there!

Last Sunday I fulfilled a long held dream. For years I had wanted to walk the Wenvoe Tunnel.

This is a large tunnel running underneath Culverhouse Cross in Cardiff.  It is arrow-straight with a single air shaft halfway along. 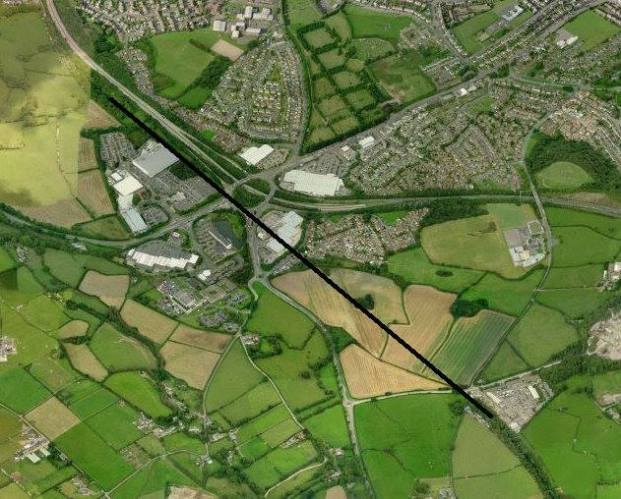 This map shows the route of the tunnel. The large buildings in the top left are Marks and Spencer and Tesco at Culverhouse Cross in Cardiff. The black line shows the extent of the tunnel.

The Barry Railway Company started work on the Wenvoe Tunnel in 1888. It was built to create a direct link down to Cadoxton and Barry Docks from the South Wales Valleys. The line was 18½-miles long from Trehafod into the docks in Barry. It is the same line that ran along Walnut Tree Viaduct near Tongwynlais. In 1898 the tunnel was completed and in full use.  It was, and still is, one of the longest tunnels in south Wales at 1867 yards, a shade over 1 mile long.  The tunnel was closed in 1964

Three intrepid explorers set off on a sunny Sunday afternoon. We were glad it was dry and sunny; the tunnel now suffers badly from flooding, with waters reaching a depth of four feet after heavy rainfall. A walk through in winter is not recommended.

Access to the tunnel is reached from Marks and Spencer car park at Culverhouse Cross Retail Park and we parked our car in the car park, actually just behind Tesco and headed off through some thick undergrowth and then down a steep bank.

We then crossed over a fence and a small field and found ourselves in a pleasant meadow where grass and clover grew in abundance. We followed a winding path.  After less than five minutes we found our absolute hidden gem. Situated near one of the busiest road junctions in Wales is the mysterious entrance to the long disused tunnel. 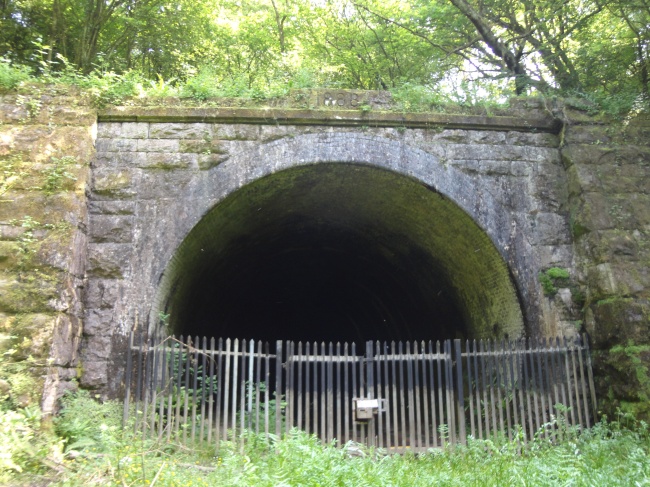 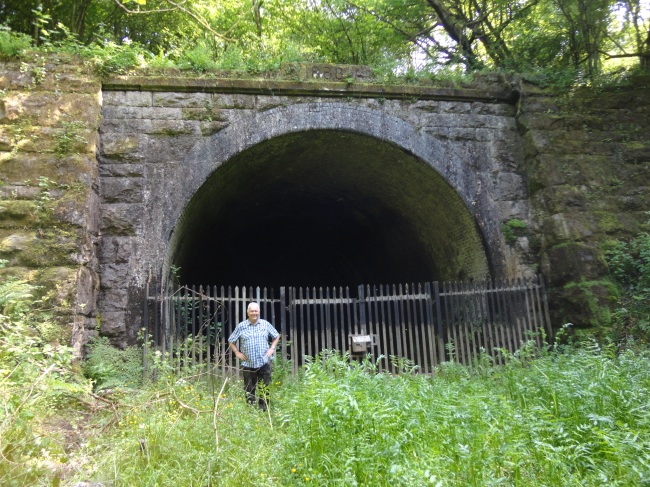 It was magical! We stood at the brim of a deep, oval cutting, the northern portal somewhere below.  A slippery slope led down to the flooded cutting and the old track bed, silent now for almost fifty years. Bright green weeds and algae were thriving in the still water.  One step in the mud and my legs almost disappeared from my knee down. 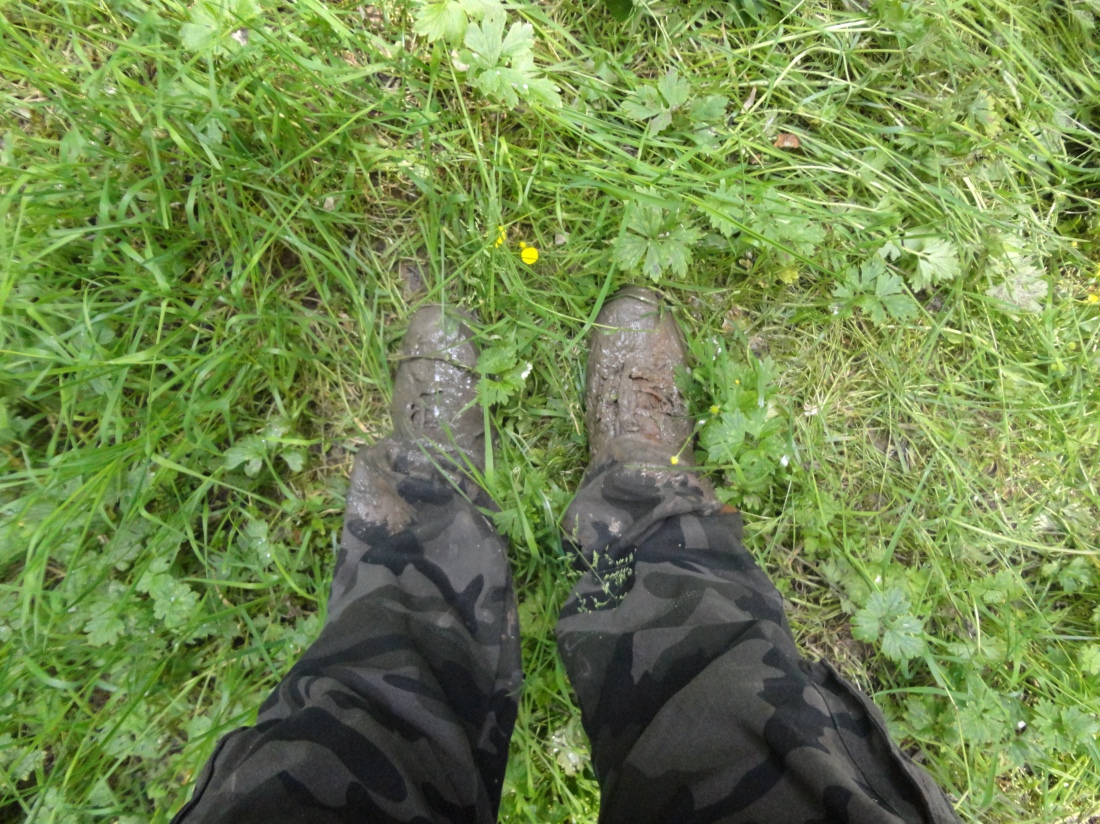 We knew from other explorers that the fence was completely sound other than a missing spike above the lock, but one of the fence slats to the left of the gate is loose, and can be rotated around and we squeezed through with only a minimum of embarrassment.

The excitement was almost unbearable. The tunnel is dead straight (with a gradual ascent from the north portal).  It is wide too, and in its day carried double track all the way. We entered excitedly, led by Gaz. 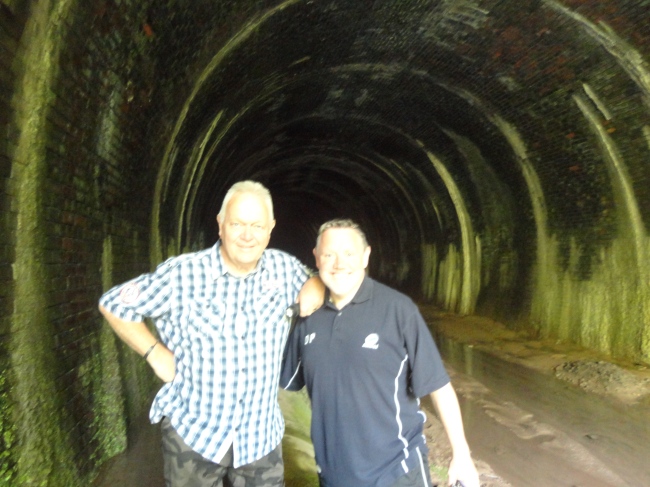 Immediately you could see the south portal 1867 yards away just a tine chink of light. We could hear water dripping; otherwise all was silent in the magical world of The Wenvoe Tunnel. 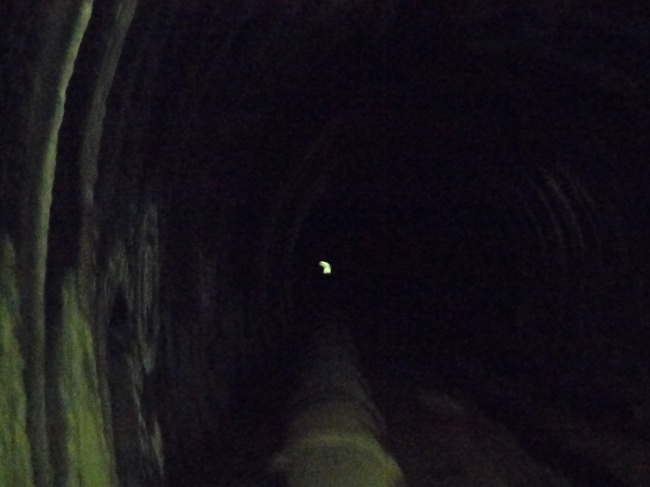 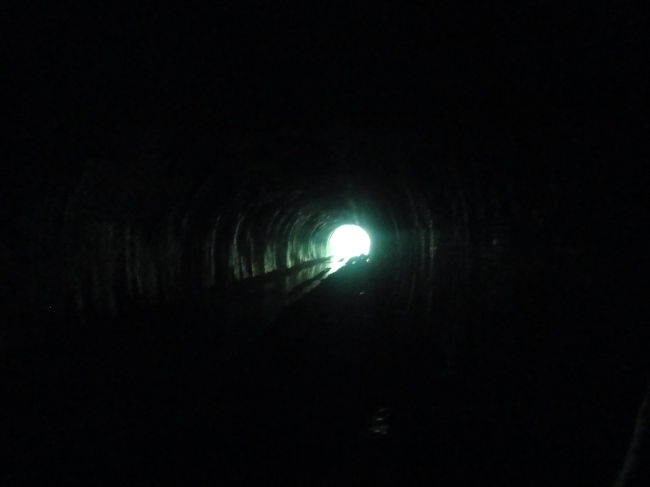 Walking through the tunnel was quite easy as a large water main runs the length of the tunnel and makes an excellent causeway to keep out of the damp.  The main supplies the town of Barry with its water. 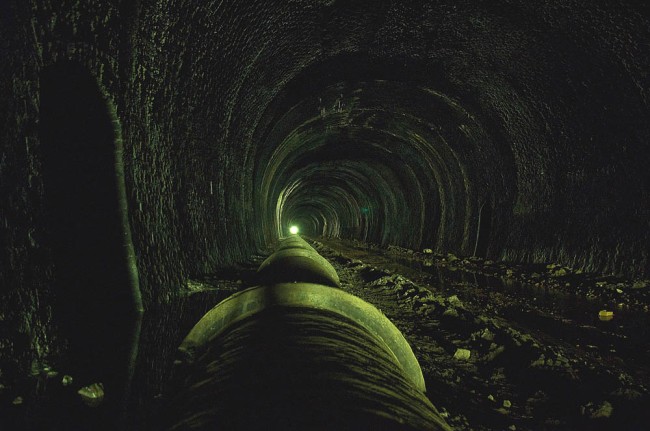 Except for the very southernmost portion of the tunnel, both walls and roof are neatly lined in brick.  There are no bulges, cave-ins or repairs evident.  The most striking features are the calcite and rust deposits that have formed on the walls; some are truly amazing. 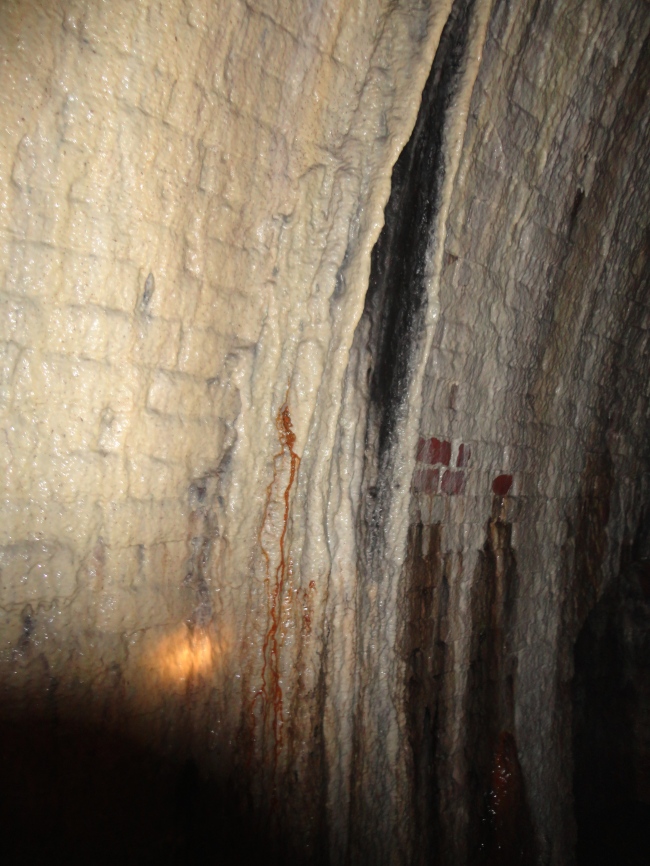 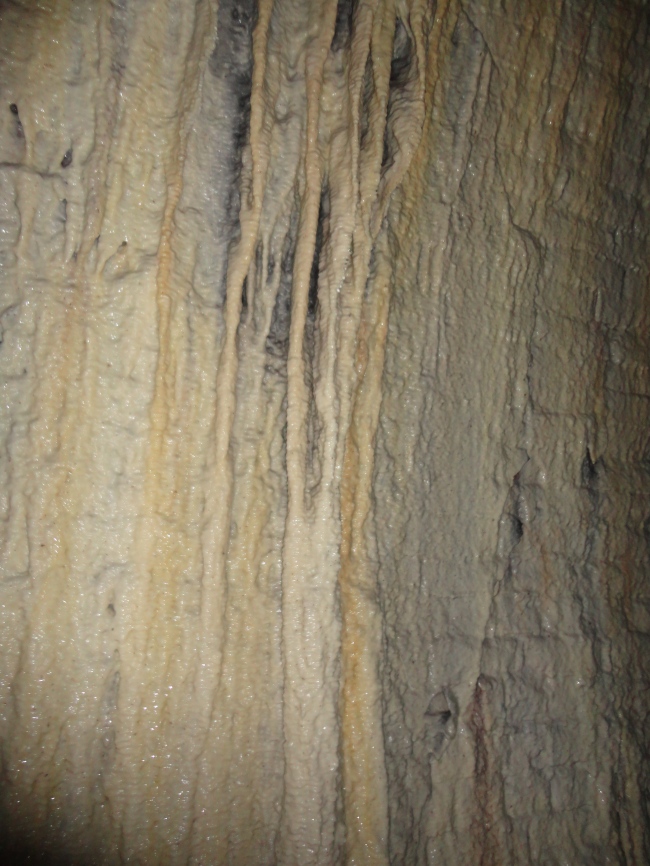 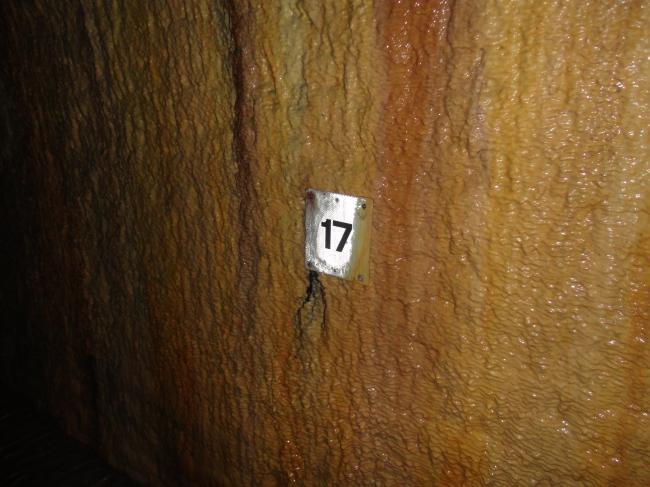 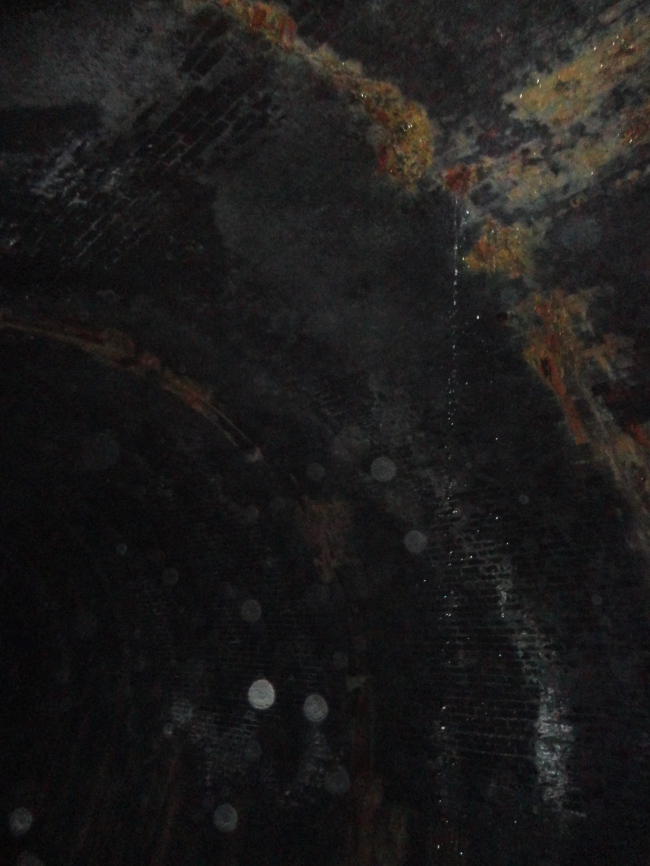 We made our way through stopping often to take photographs and be amazed at some of the sights there. We saw curtain stalactites forming on the curved walls, jet-black secretions and thick rust build-up, and some portions of the wall are completely encased in calcite. 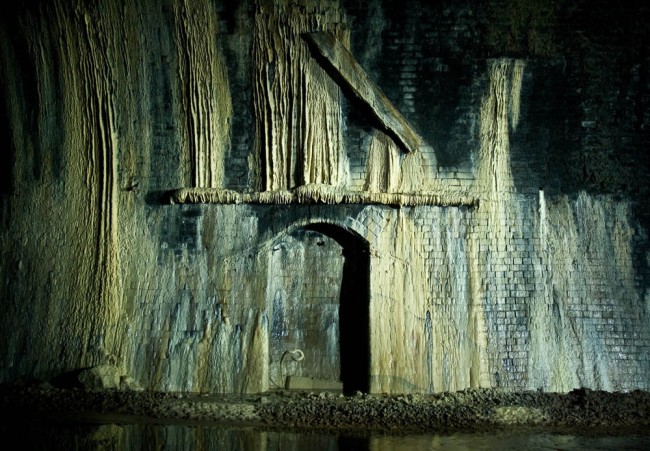 Along the edge of the tunnel are markers, each one marking the old measurement of chains. At the 46-chain mark, we came across a huge airshaft, which dominates the tunnel. 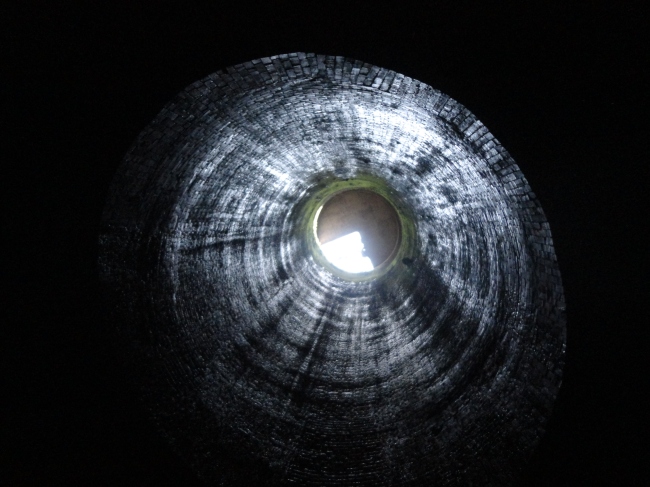 It’s massive, almost the entire width of the tunnel.  Enough light spills down it to be able to turn all torches off whilst nearby, and directly below it a huge pile of assorted junk has built up.  We stopped here, amazed at what we saw. When I was young we used to look at the top, which used to stand near the Old Culverhouse Cross Roundabout near the old caravan park, but to be at the bottom and in the middle of the tunnel was magical. 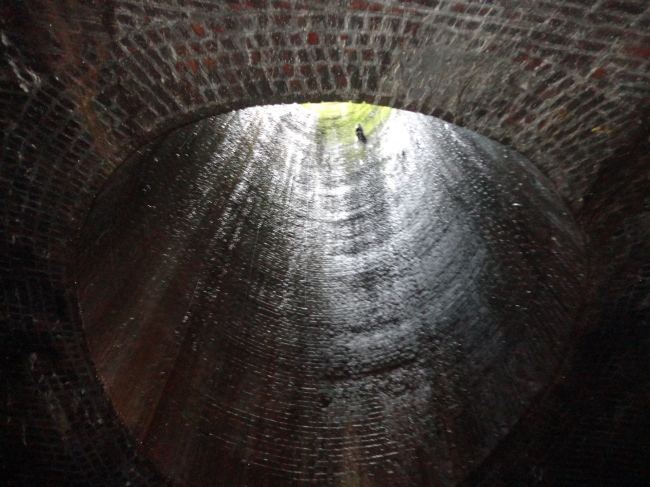 We pressed on and as we neared the southern end we noticed that our voices had begun to echo much less and we saw that the tunnel was not brick lined here but natural stone. The tunnel builders must have had to blow their way through the rock here. We guessed we were nearing the site of The Wenvoe Quarry. As we neared the end we saw that it again was brick lined.

An interesting and little known fact is that Royalty often spent the night in the tunnel if the royal train was in the area! During the Second World War especially, if the King and Queen were on a visit to the area in an effort to keep them safe in case of air raids during the night, the Royal Train was run into the tunnel and remained there until the morning. Guarding it was relatively easy, although they would have had to stop coal trains using it during that time. 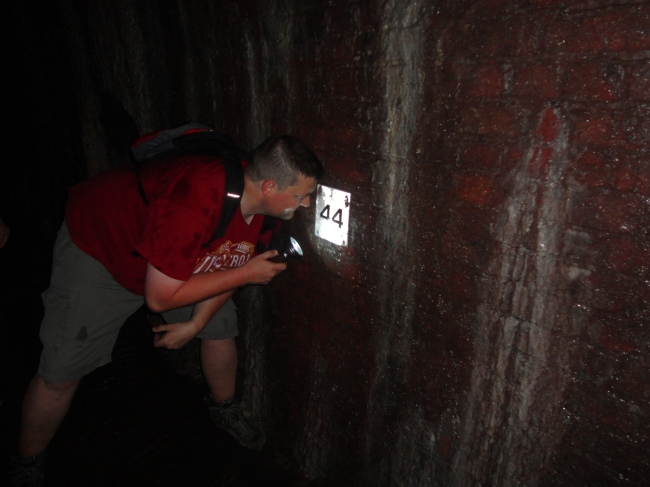 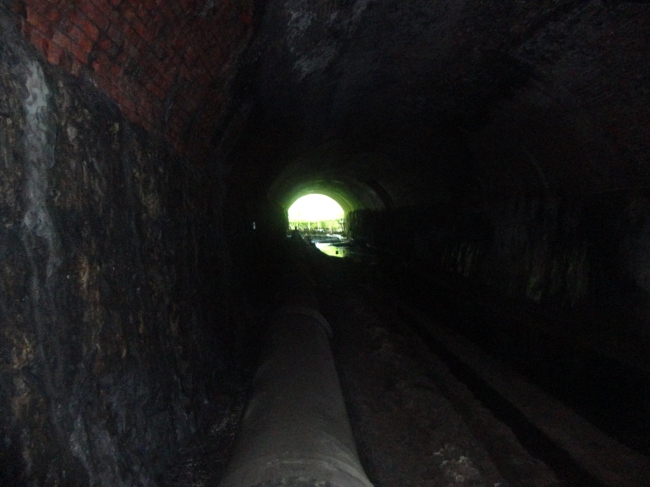 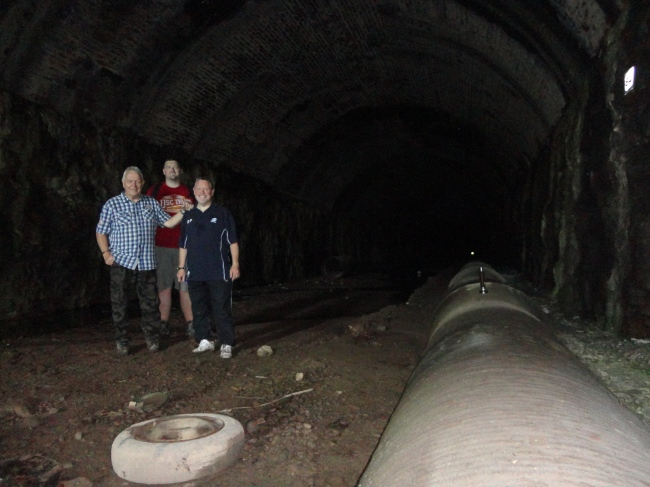 Looking back down the tunnel from the south portal. 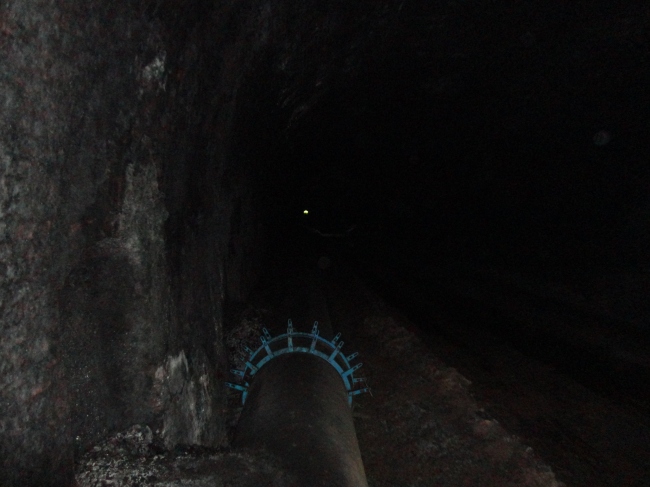 We stayed for a few minutes for a photo shoot before the long journey back along the pipe to the northern portal. The journey back seemed shorter although no less fascinating.

We reached our starting point tired but exhilarated. Gaz, Muzzy and I felt our expedition had been a great success

What a journey, what a thrill! The only thing missing was the thunder of a steam train thundering through with its precious cargo of black gold, but then somehow the magic, which came with the desolation and silence, might not have been there.

One story from the past is recorded:

I used to know an elderly gentleman who’d grown up in the 1920s in Ebbw Vale, and whose father was friendly with one of the signalmen who manned the Drope signal box near The Wenvoe Tunnel. On one visit he was able to walk into the tunnel and stand in one of the safety recesses in the wall while a locomotive thundered past. It was, he said, both the most exciting and the most frightening thing he’d ever done!

I hope this forgotten gem remains untouched and available for generations to come.

37 thoughts on “Adventure is out there – The Wenvoe Tunnel”