Alfie arrived early this morning looking bleary eyed and tired. He had been awake in the night, and it showed. As usual, the lady of the house made a big fuss and kindly offered to get the little lad ready for the day in exchange for a lift to work. Seemed like a good deal to me. He looked very dapper today, after she had finished. When we got to the good lady’s workplace he was duly whipped away, to be shown off to her colleagues. He came back in good time and we set off for home through the busy school traffic.

When we got back, Alfie showed off his feminine side and played with a little pink pushchair for a while, taking a little rag doll in and out at regular intervals. When I looked up from the newspaper after a while, Alfie was standing there with his dummy in his mouth and his little comfort blanket gripped in his hand. I was torn between reading the latest articles about the ongoing saga at Manchester United – I am still overcome with grief with the impending retirement of AF – and giving my grandson and little friend a cuddle. Alfie won hands down and he snuggled in under the blanket on the settee. I was considering watching Jeremy Kyle; it’s been a while since I have sat mouth open at the antics of some of his guests, but just as Alfie’s breathing was getting heavy, the phone rang and disturbed him big time! He had another little play and then gave me a look, which said, “Get me into the cot quick!” which I did, and he slept for quite a while. It meant our Adventures would start later than usual. 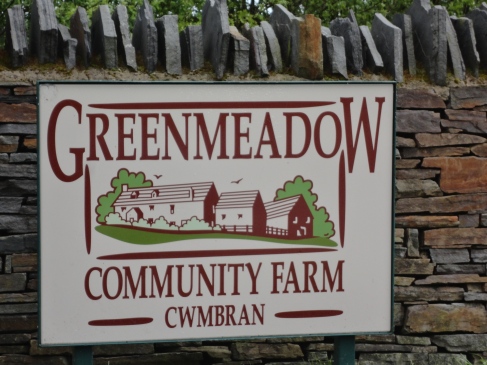 Greenmeadow Community Farm has been a working farm for over 250 years. Set in over 120 acres, we have a wide range of pedigree and rare animals, which you can come and meet up close.

Nestled in the heart of Cwmbran, this is truly a Community Farm in every sense of the word, working closely with and serving the local community and welcoming visitors from far and wide.

We have a cosy farmhouse cafe offering kids’ favourites and a selection of homemade specials. We aim to use as much local produce as we can, supporting local farmers, growers and suppliers. We are planning to develop the Farm’s kitchen garden so that we can supply the cafe with fruit and vegetables grown on site. The tea, coffee and sugar we serve is Fair-trade.

The farm shop is full of tractors and animals to take home after your visit to the Farm. There really is something for everyone. We are forging relationships with local craftspeople and hoping to offer more locally made farm-related items in the shop.

From 1st February to 23rd December Greenmeadow Community Farm is open 7 days a week, whatever the weather

From Saturday 23rd March to October 2013

The Farm is closed from Christmas Eve until 31st January inclusive.

We operate a seasonal charging policy for admission to the Farm.  Admission prices are as follows:

It was the last bit that caught my eyes… as well as little pink pushchairs, Alfie LOVES big tractors. His favourite toy in the nursery is a green tractor, which he loves to play with every week…and he is eligible for free admission.

Greenmeadow Community Farm it is then.

When Alfie was up and about we set off. I had loaded the car with all that was needed while he was resting and building up his energy reserves ready for a big day of adventuring!

We headed up the Ely Link Road and down the M4 before leaving at Junction 26 and heading for Cwmbran and the farm. Cwmbran is a new town in Wales. Today it forms part of the county borough of Torfaen and lies within the historic boundaries of Monmouthshire. Cwmbran was established in 1949. On old maps Cwmbran is a farm. The farm lies on the edge of the town. As we drew close we both got very excited.

Greenmeadow was ‘rescued’ over 25 years ago by a group of local people. When the previous owner died and the house and farm became empty, they decided to buy the Farm and turn it into a Community Farm to ensure that it would remain a green space for the town and to provide a service to the local people and visitors alike. It is now a local treasure and the people of Cwmbran are very proud of it.

The actual farmhouse dates back to 1752 and is built from local Welsh stone with a traditional Welsh slate roof. The date stone above the fireplace in the café is original and proudly states the initials of the people who first lived here – Edward & Anne Jones. The letter I is shown instead of a J, as before 1800 Jones was spelt Iones. 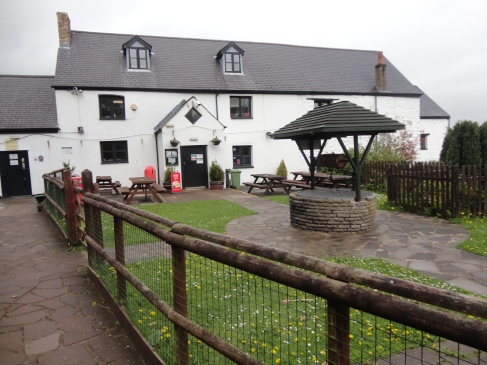 The farmhouse has had a number of different owners since then. At one point the Adit Colliery, a local coal-mining colliery, owned it. Because of the colliery’s importance to the area, the farmhouse was the first house and for many years the only house in the area to have electricity.

The layout of the farmhouse has also changed over time. The area that is now the farm shop was originally a traditional farmhouse kitchen and scullery. The storage and repair of the Farm’s tractors as well as the stabling of its horses took place where the current kitchen stands and the small dairy herd was milked in the area that is now used as a hand washing facility for our visitors.

The farmhouse retains many of its original features including the beams, which can be seen in the café. There are several meat hooks hanging from the beams, which would have traditionally been used to hang salted meat as a method of preservation prior to the invention of fridges and freezers.

We parked the car and made our way to the entrance. I was charged £4.20, which did not match any price I had seen, but I was happy and we headed in. 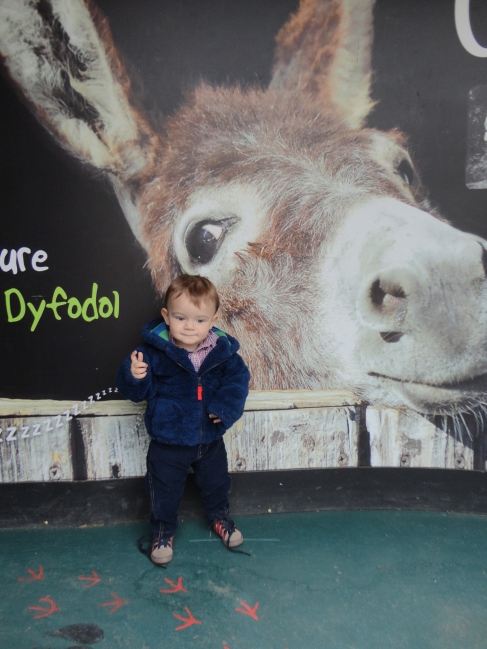 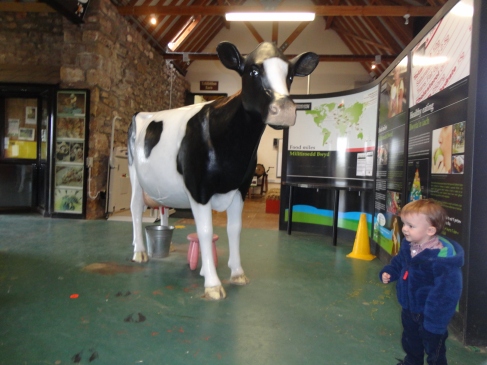 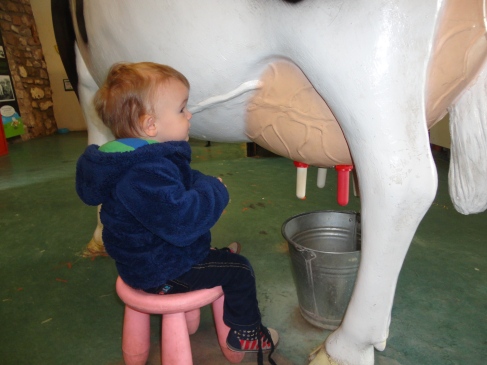 We went to the building housing small animals first. Alfie was so excited. It contained rabbits, guineu pigs, mice, rats, some massive tortoises and a load of new born chicks, he was running around and around the cages trying to take it all in. I think he like the large brown rat the best, probably my least favourite animal of all! 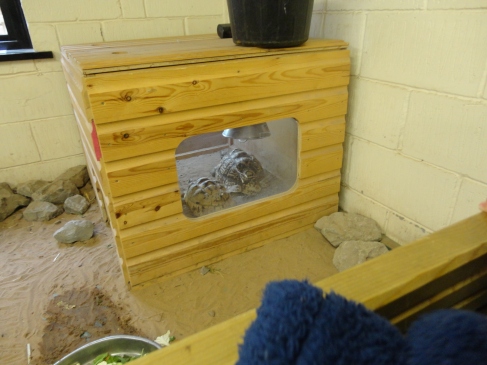 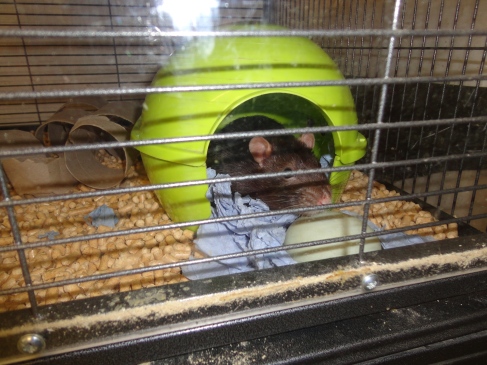 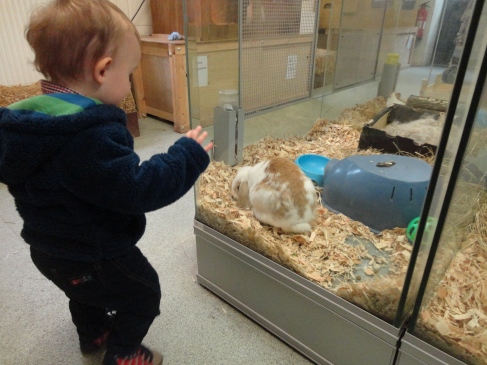 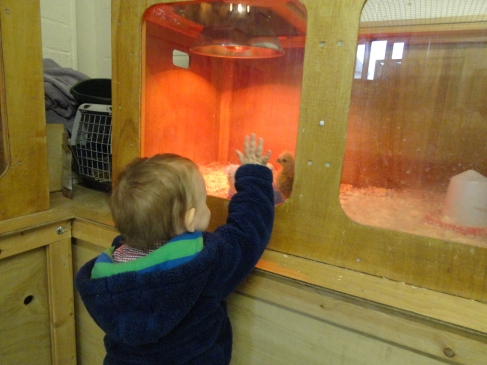 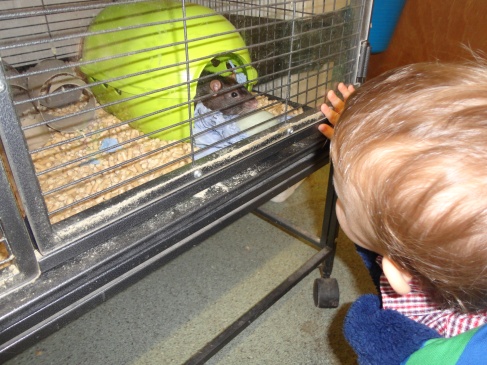 From here we headed down towards the bigger animals. Alfie is walking everywhere now and it’s much more fun for him and me. A sign told us that the tractor ride was at two o’clock. 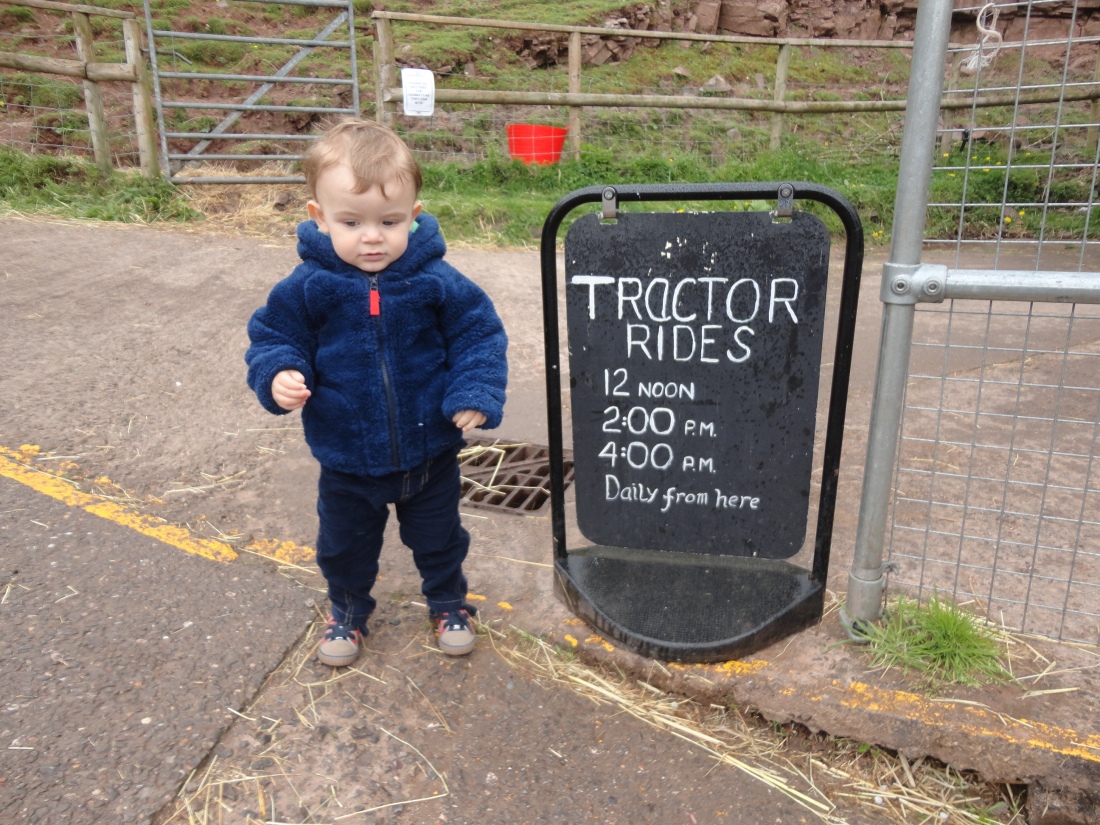 We had about an hour to see the larger animals and have lunch before the big event! We passed several pens with rabbits and pigs before coming to a barn full of pigs, goats, chickens and cows – two big Friesians. 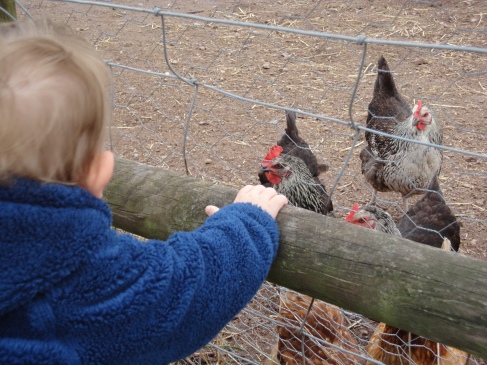 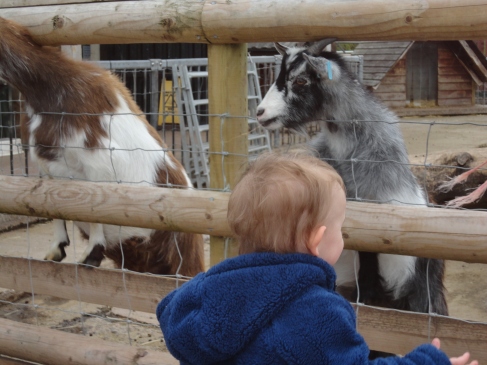 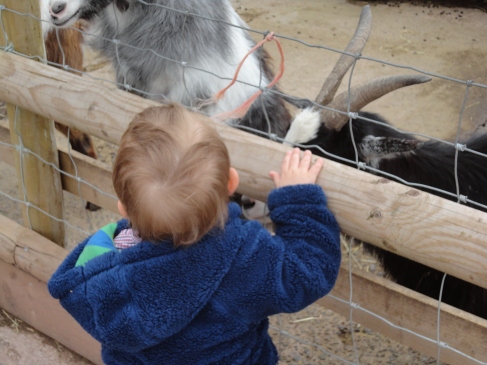 Alfie loved them all. When we passed a pen containing a massive Middle white pig. As we passed I am sure I heard Alfie saying ‘Nanna!’ 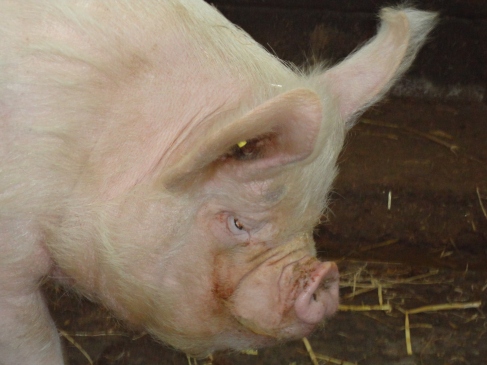 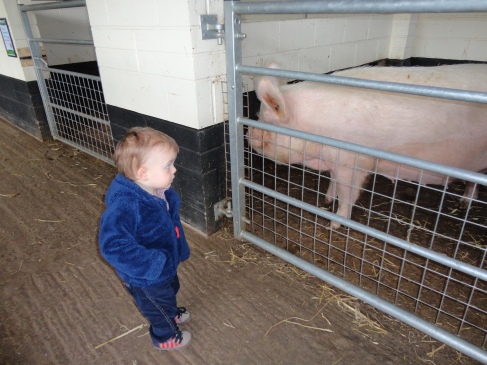 I stepped back to look again and noticed the resemblance was striking. The pig looked like it had run into a brick wall and squashed its face. I smiled and walked on. We had a great time here, but soon it was time to go and have lunch, so it meant a walk back up to the café near the entrance.

When we got there, the thought of a sausage sandwich or a tasty bacon roll somehow did not seem so attractive. I wondered where they got the pork from and decided to give it a miss. Alfie didn’t seem to care much so I ordered him a child’s meal of some home cooked ham and some chips. He loved it!

We left the café just before two and headed down to the barn again where the tractor was waiting to take us on a ride. 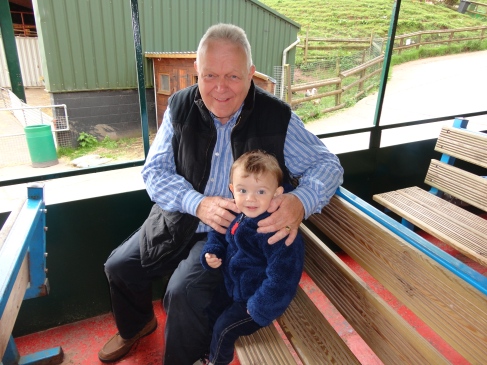 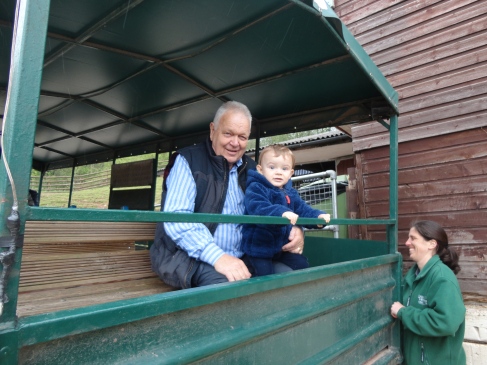 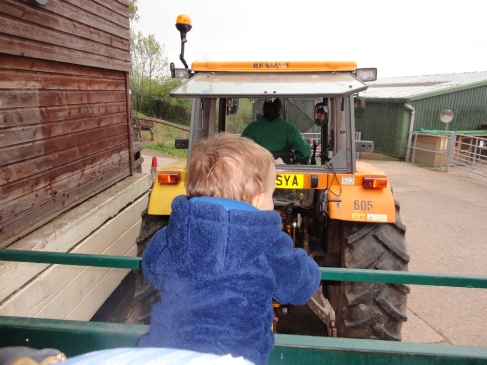 The tractor was massive and we had to sit behind in a big green trailer. Luckily the front seat was free so we made for it. Alfie was beside himself with excitement and all the way around on the ride he was shouting and pointing. It was an incredible experience for him…and me. We had a tour of the farm, looking at some rare breeds of sheep and some beautiful little ShetlandPonies. 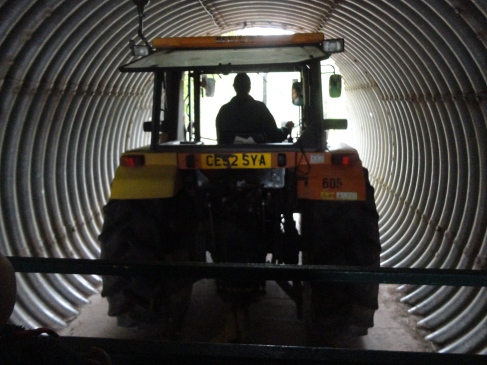 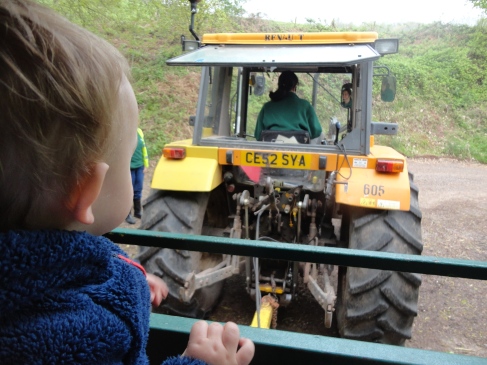 On the way out and on the way back we passed under a corrugated tunnel, which was great fun.

After the trip was over we made our way slowly back to the car. It was good to stroll about with the little man. 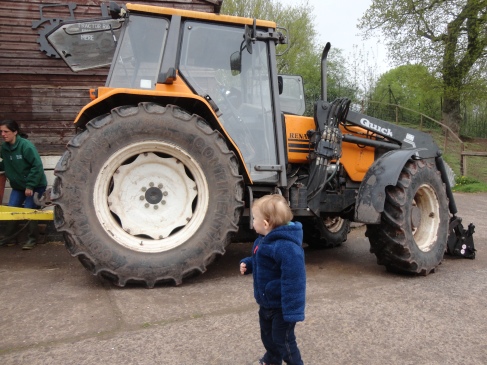 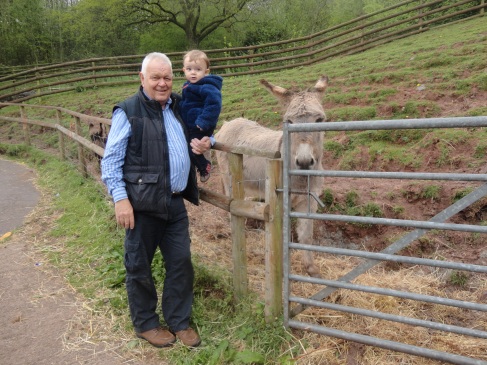 Whilst driving back I realised we had to pass by the school where Alfie’s mum works. This would be a good end to the day. I made a quick phone call and turned off the M4 one junction before the usual one and it brought us to the school.

Alfie was so delighted to see his mum. 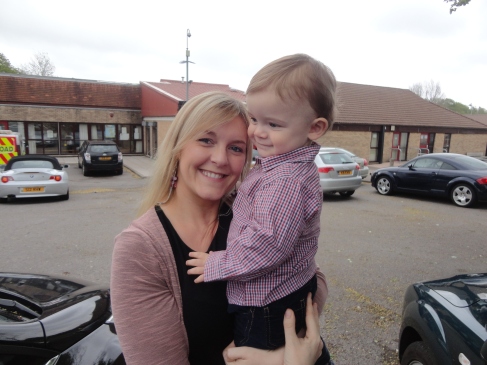 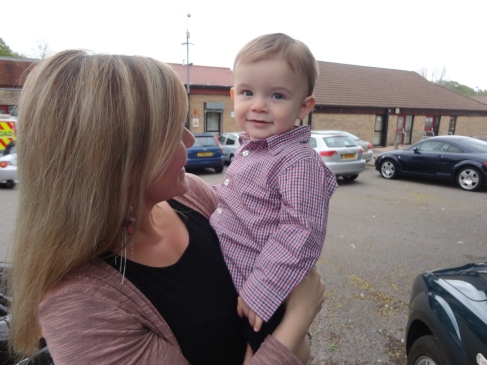 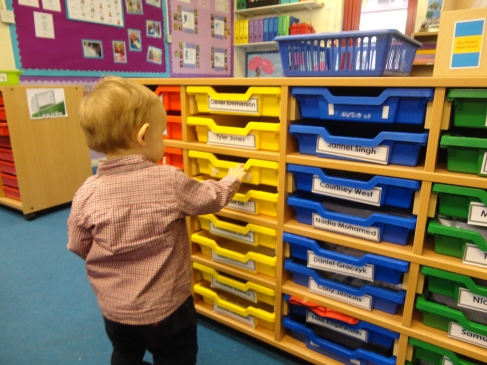 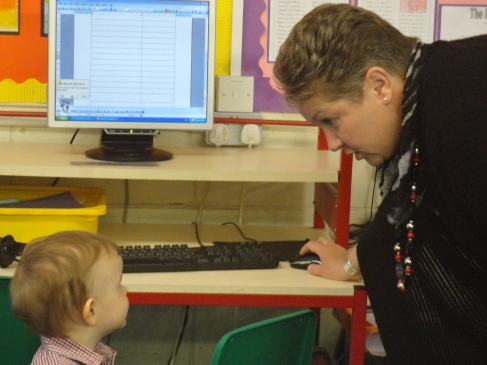 I travelled home alone and missed the little smiling face in my mirror, but smiled myself when I thought about the great day we’d had.

Thanks Alfie… another good one buddy!