This has been a wonderful week. Alfie has been staying with us for a few extra days as his mum had been called to work. On Monday Alfie had travelled to Bath with us and enjoyed breakfast in the Pump Rooms and a wonderful day looking at the sights of that great city. We went to Bath at the request of Richard and Kim, two friends of ours from Northern Ireland and the U.S.A. who were staying at our place.

On Tuesday Alfie and I had taken our two friends on a mini tour of the area, showing them Hebron Hall, Cosmeston Lakes, Penarth town centre and seafront – I am still mystified at what is going on there, the pier will look great when it is done but that building site where Rabaiotti’s used to be is a disgrace and an embarrassment.

Richard and Kim also wanted to see St Fagan’s and ‘The Fairy Castle’ otherwise known as Castell Coch. When Richard stayed with us we gave him a book all about Cardiff and Castell Coch had stood out for him as a place to visit. We were happy to take them. After Penarth we headed for Tongwynlais.

Castell Coch was the beautiful fabled home of a very wealthy man. While resting on ancient foundations, Castell Coch, which means Red Castle in English is relatively modern, the by-product of a vivid Victorian imagination, assisted by untold wealth. The Middle Ages fascinated the Victorians as much as the Victorians fascinate us today. High Gothic was the order of the day.

The ‘eccentric genius’ William Burges was given free rein by his paymaster, John Patrick Crichton-Stuart, the 3rd Marquess of Bute, to create a rural retreat to complement the opulence of his main residence, Cardiff Castle. He didn’t hold back. Dazzling ceilings, over-the-top furnishings and furniture were liberally applied.

Detailed architectural drawings still survive today and following Burges’s death in 1881, colleagues faithfully continued work on the interiors for another ten years. The castle was not suitable for, nor was it intended to be, a permanent residence and the family’s visits were infrequent.

When Alfie and I took Richard and Kim to Castell Coch it marked the end of probably a thirty-year gap since I had been before – what a waste, I had taken the place for granted all these years and I never realised before what a treasure it is. When we visited on Tuesday Alfie had been asleep so we had not gone in, but our friends had spent a couple of hours inside.

So we decided having not visited for over thirty years, we would make two visits in a week. It would be fun!

Alfie stayed overnight and the lady of the house had him bathed and dressed when I got up. He looked great. After breakfast, we took the lady of the house to work and then prepared for today’s adventure. On arrival home I had the usual ritual of unclipping Alfie’s harness in the car seat and then letting him play with it for five minutes. He is fascinated by straps and buckles. I sat and listened to Chris Evans.

We went inside.  Back in the house, as I was tidying up, Alfie noticed the back door open and made a bolt for it. In doing so he caught his foot on the dog basket and tripped and fell into the open door. He caught his head on the door and was sporting an egg shaped lump, almost as big as the free range ones I get from Janice and Tony for the rest of the day. I am still puzzled why Alfie was making a bolt for the door, as the current locking system is quite adequate.

After this we fed the fish, played in the garden and Alfie had great fun in the playhouse. 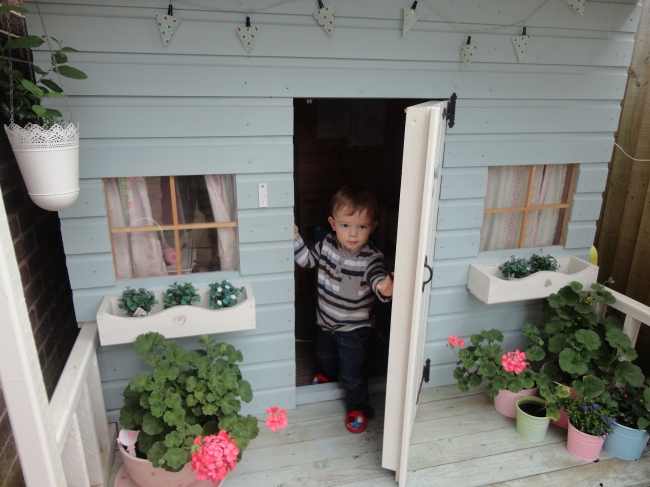 After Aunt Bes got home and I helped her with some business, Alfie and I set out.

We travelled first to Thornhill Cemetery. On fathers’ day I noticed that my parents’ grave needed a Spring clean, so I had promised myself that as soon as I could, I would take my garden tools and spruce it up a bit. When we arrived Alfie had dozed off so I began work alone. It was a peaceful morning and in a strange way, dad and mum felt very close. They are not there I know, they are at home in heaven, but being there in the quietness and reading the words of Elizabeth Barret Browning’s poem “How do I love thee’, which is engraved on their headstone, caused me again to thank God for two such absolutely wonderful people I was able to call my parents. We are currently going through 1 Corinthians Chapter 13 in church, that great biblical piece on love and each week I think of them. We have learnt that… Love is patient, Love is kind, Love does not boast… and it reminds me of the house of love where I grew up and all those characteristics of love were regularly shown. My dad and mum both lived a life of love and I am committed to carrying that on with my own family. I smiled, wiped a single tear away from my cheek and got on with the job. 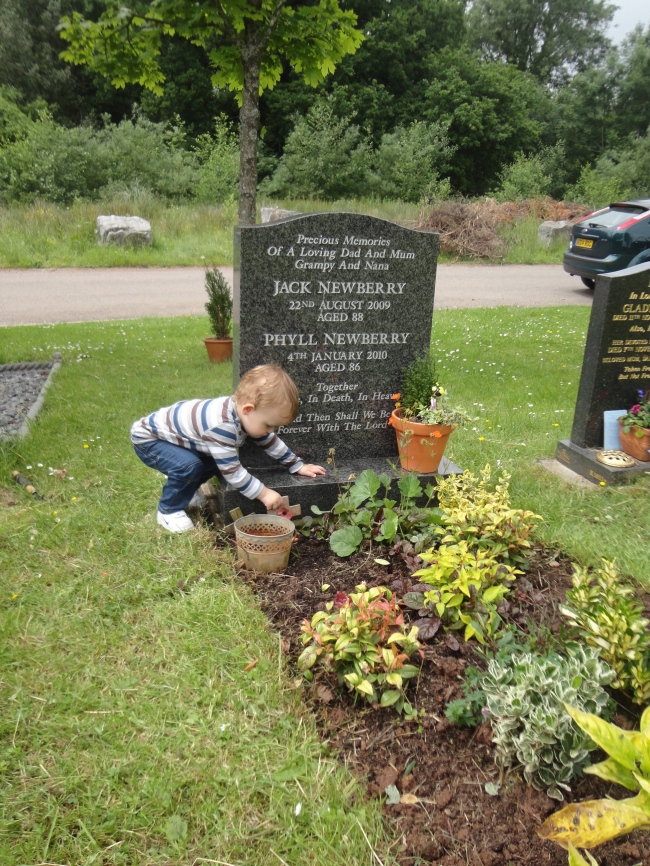 I loved that time pulling up the weeds and grass – I felt like I was doing it for them. I wasn’t long into it when I heard the little fella, talking in the car. I got him out and he joined me kneeling by the graveside. He’s not into gardening much, so he was soon off exploring the other graves. He did find some of the other ones much more interesting than my dad and mum’s and played with the windmills and little ornaments that people had left on the graves. He was always totally respectful and just touched them and flicked the windmills to make them turn. 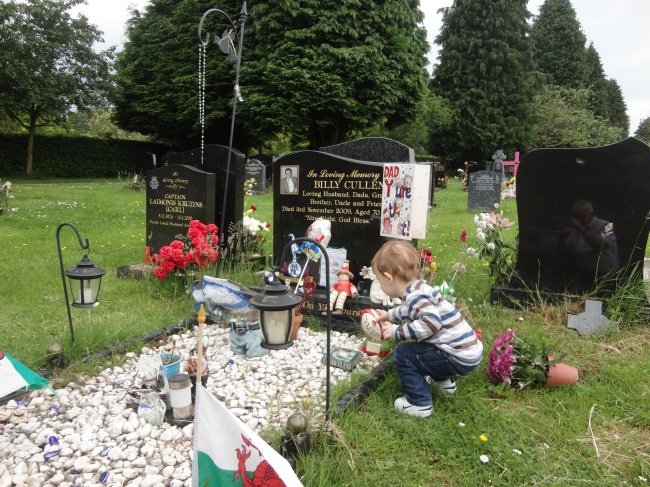 I feel certain that the owners of the grave would only smile if they knew a cute little lad was fascinated by things put down to treasure their memories. There were many sad stories behind some of those graves, so many young people.

I got chatting to a couple of ladies who were tending the grave of a husband and dad. They had a car with a complete flower arranging set up in the back and the results were fantastic. I complemented them and thought of my mum’s old shop ‘Flower Trend”…  happy days!!

We then moved on to tidy up the lady of the house’s dad’s grave, although as he was cremated he has a plaque with his name on.  He was a wonderfully kind and gentle man who was loved by all who knew him. I had the privilege of knowing him for only ten months but during that time I came to know and love him. He did a wonderful job of raising his children, but sadly he was taken from us too soon! 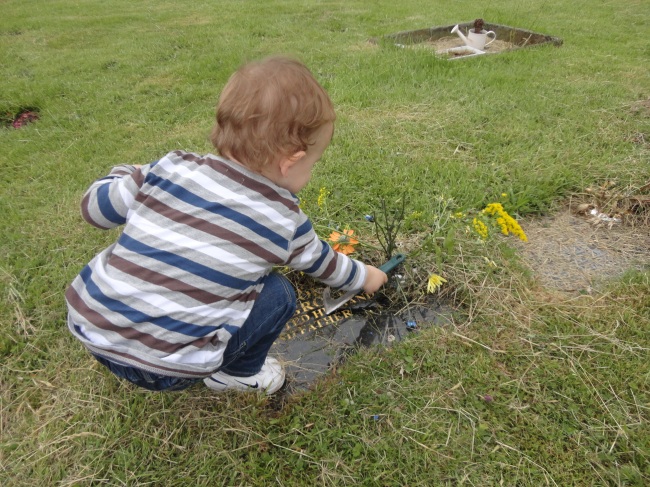 Alfie was great here and helped me in cleaning the stone to bring it up to a standard, which honoured the great man.

From here we moved on to Castell Coch for our visit. We drove up through the small village of Tongwynlais.

Tongwynlais is a small community village in the north of Cardiff. It is a quiet, friendly place with a population of around 2000. The village is very popular with cyclists as the Taff trail passes through.  If my Welsh lessons served me well Tongwynlais means ‘Sound of a white voice’. To the east of the village is Fforest Fawr, a beautiful Forest leading to Caerphilly Mountain. To the West you will find the river Taff, Forest Farm Country Park and the Glamorganshire Canal. I have always thought of Tongwynlais as being a bit rough but I am totally wrong, it’s  a pretty little village and a lively community.

We parked and made our way to the castle.

I paid my entry fee (Seniors of course) and Alfie and I decided we would start our exploring in the teashop, as we were both hungry and thirsty. We enjoyed a leisurely lunch together before starting to explore the castle, which was full of winding staircases and grand rooms. Alfie loved climbing the stairs the best even thought they were steep, high and hard. Alfie is becoming a seasoned explorer and nothing was too hard for him to attempt. 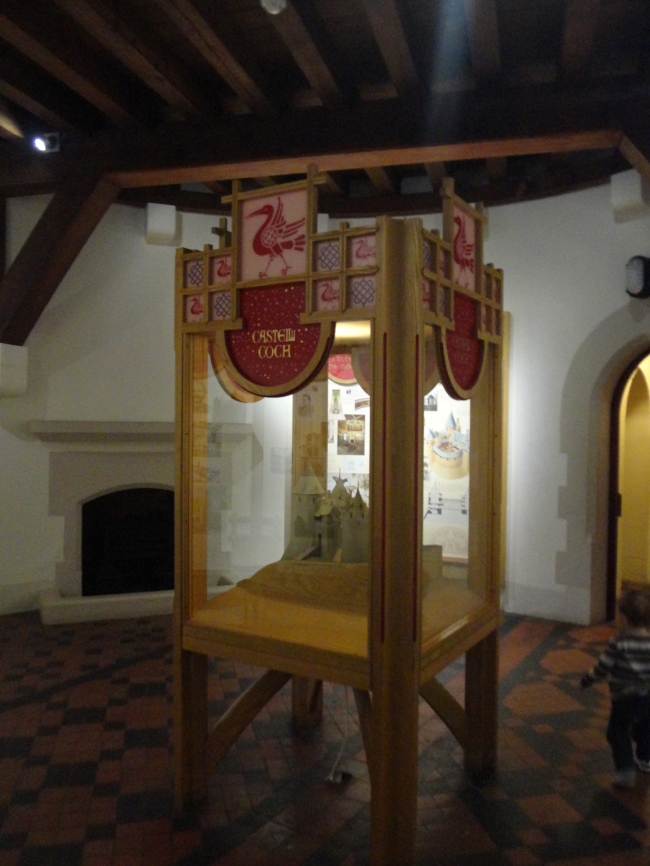 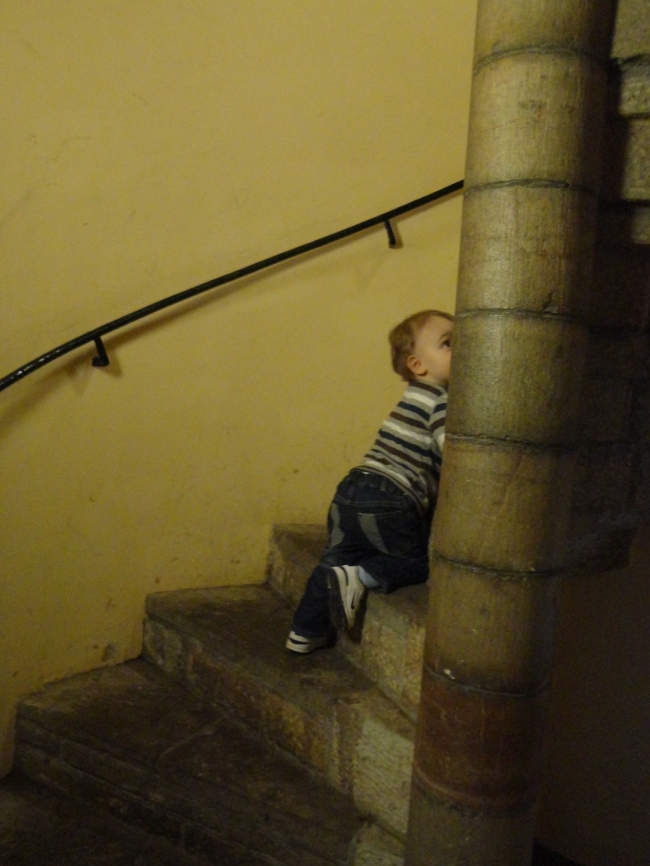 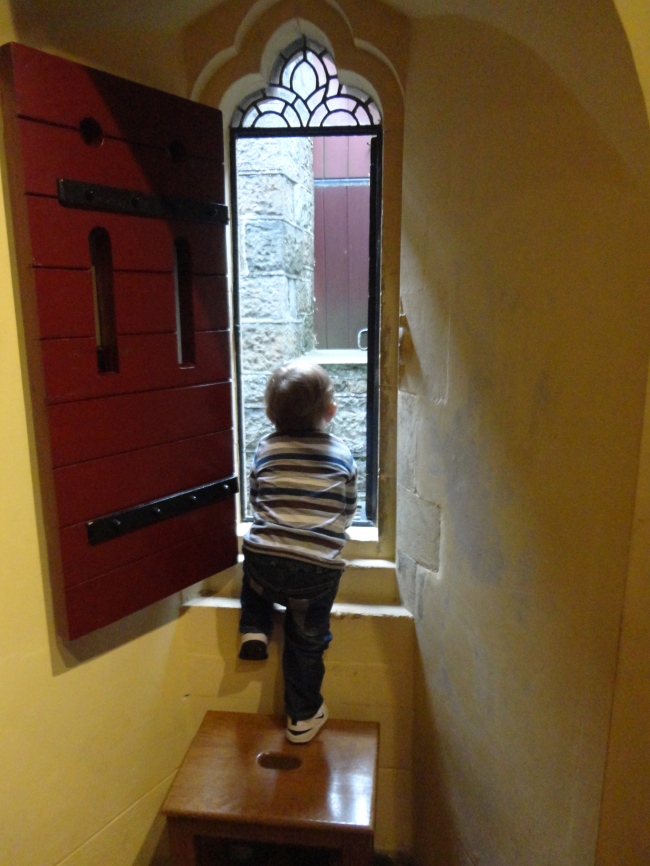 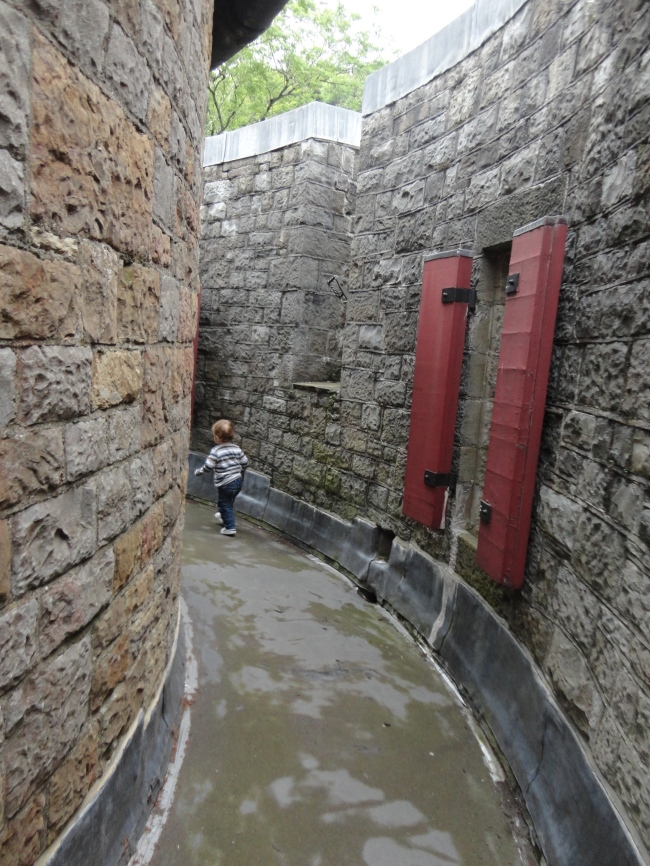 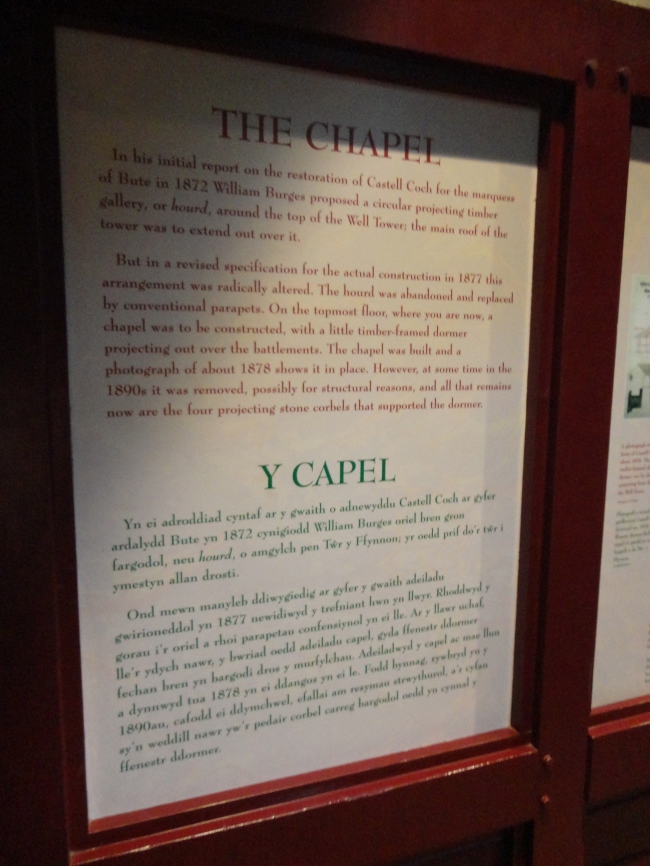 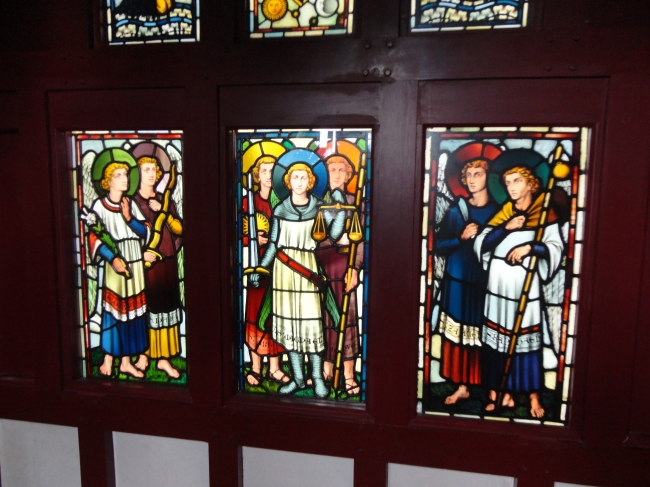 We loved looking at the grand rooms including a little chapel in one of the rooms in the top of one of the towers. Climbing downstairs was too much of a challenge for my young companion explorer and he ended to be carried in a safe pair of loving arms.

Having a look around the gift shop was, on reflection, not the best idea as Alfie decided to touch and grab almost every item on sale. We didn’t stay long in the gift shop.

As we left the castle, a wedding appeared and Alfie went off to explore the wedding car, a beautiful Rolls Royce.

He started by checking the wheel nuts, much to the amusement of the bride and the chauffeur. He then chatted at length with the wedding party…  I am sure that little lad could charm his way into any and every situation. I am certain they were thinking about adding him to the guest list! 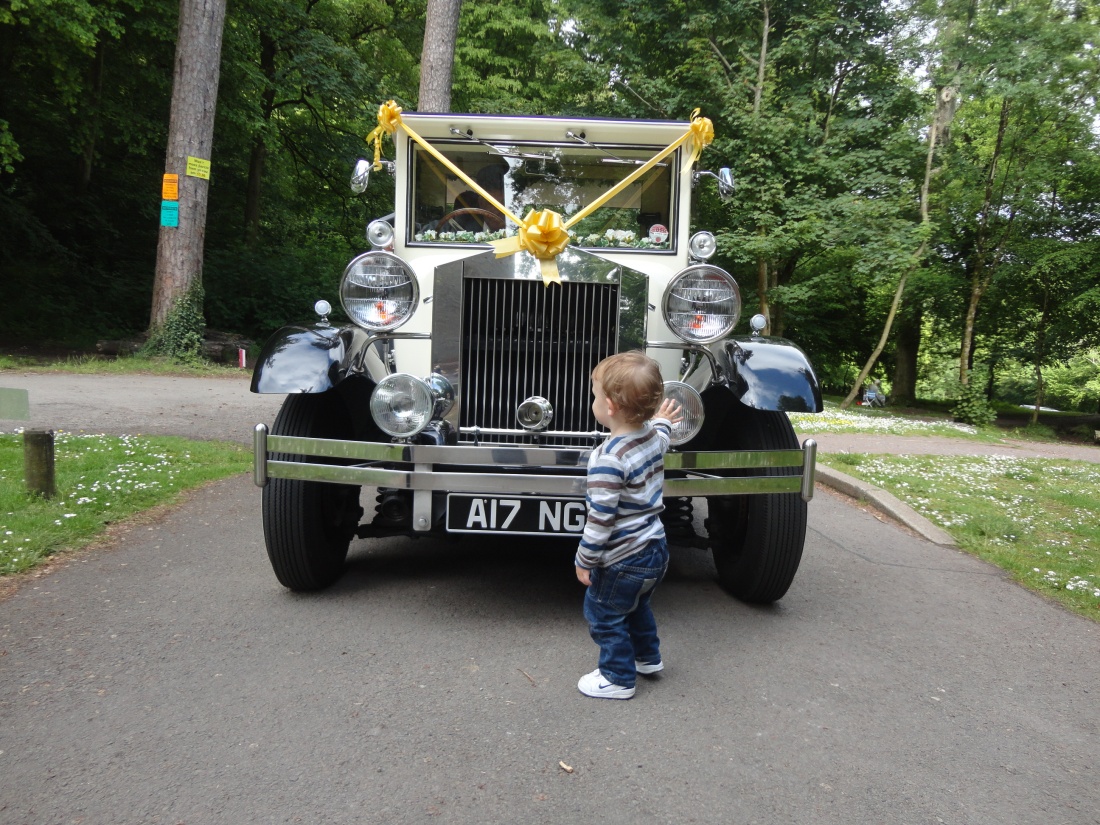 As we made our way out to explore the grounds we met a man with a dog, who began showing off his training skills. Offering his dog a biscuit he said ‘Say please…’ He laughed when both Alfie and the dog raised a hand/paw into the air and signed ‘please’. Jokingly the man offered Alfie a biscuit and was amazed when Alfie fearlessly fed the dog, often with his hand half way down the dog’s throat. The dog’s owner was very impressed at Alfie’s love – and lack of fear – of dogs. 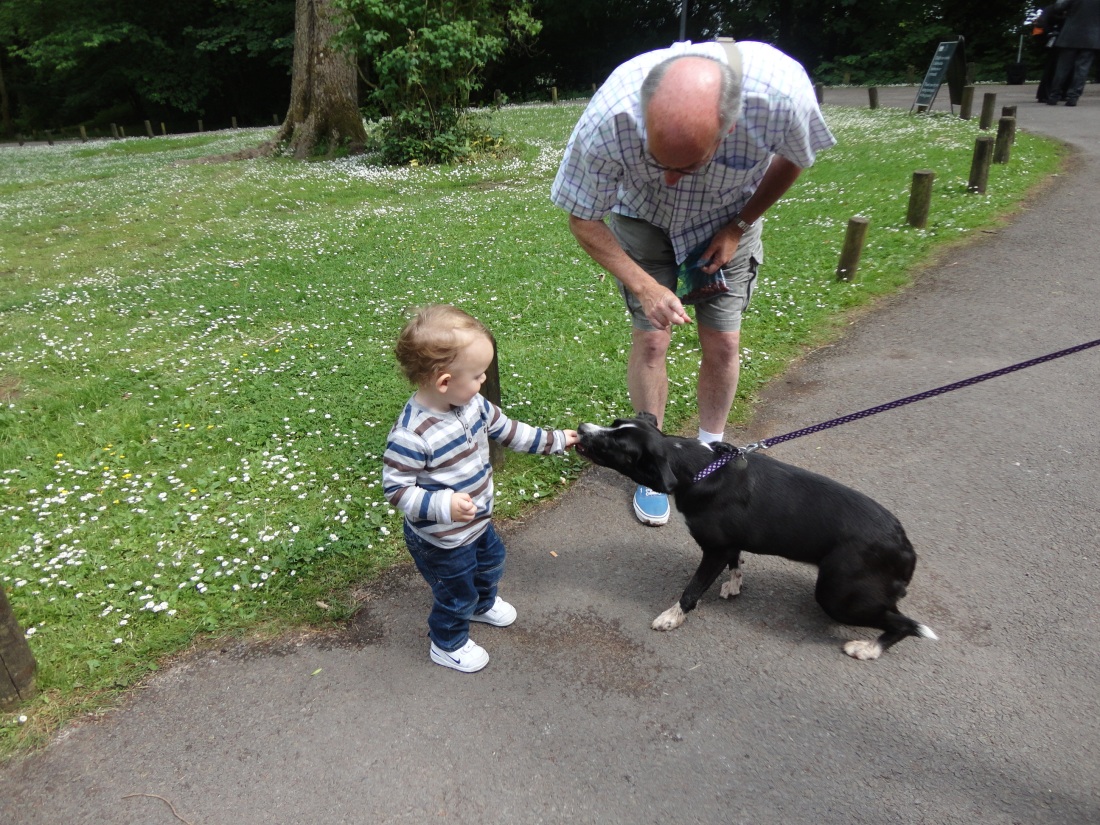 We then attempted the early stages of the Fforest Fawr circular walk but must come back another day to complete it all. Alfie loved being at one with nature and explored every log and tree! I look forward to many other chances to get out into the wild! 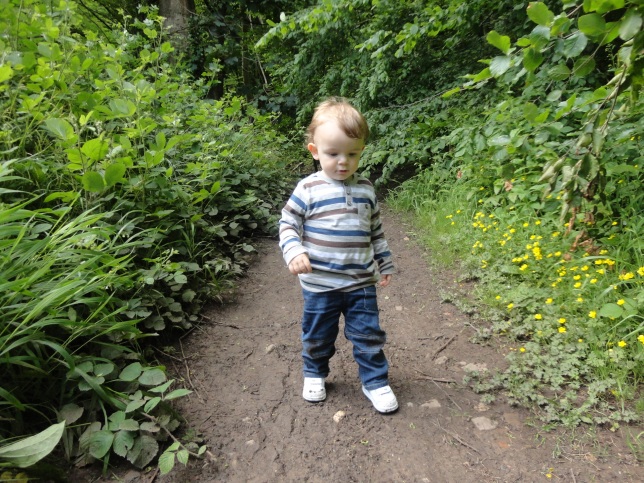 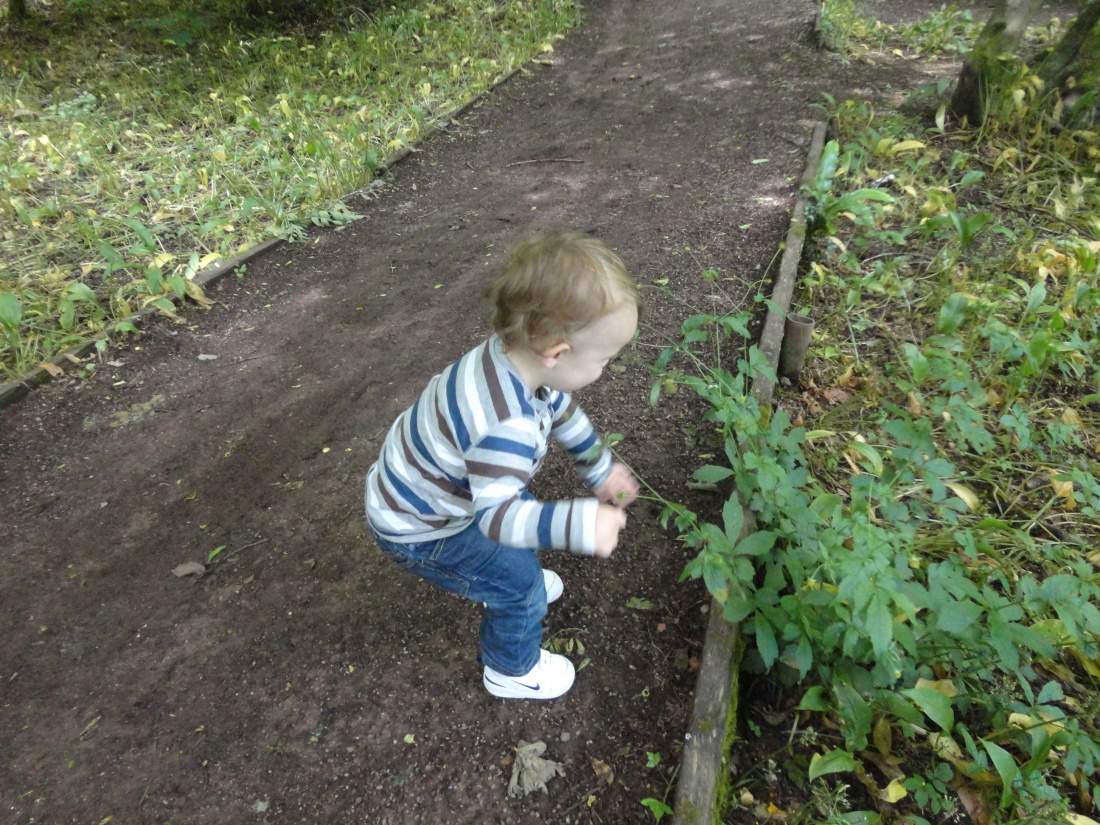 From here we had one last stop before heading home. It was Great Uncle John’s Birthday. Before today John was just Alfie’s Great Uncle. After our visit, he is now great Great Uncle John. The old fella was wonderful with Alfie and took him to explore the upper reaches of Newberry Towers, the Welsh equivalent of The Hanging Gardens of Babylon and spent much time playing games and showing him how to throw the ball to Masie.  Both John and his good lady were so good with the little lad. He loved every single minute with them. It wasn’t long before Alfie had his hands down another dog’s throat, as he shared what was left of his crisps and sandwiches with the little dog and tried to retrieve the ball after Masie chased it on numerous occasions. 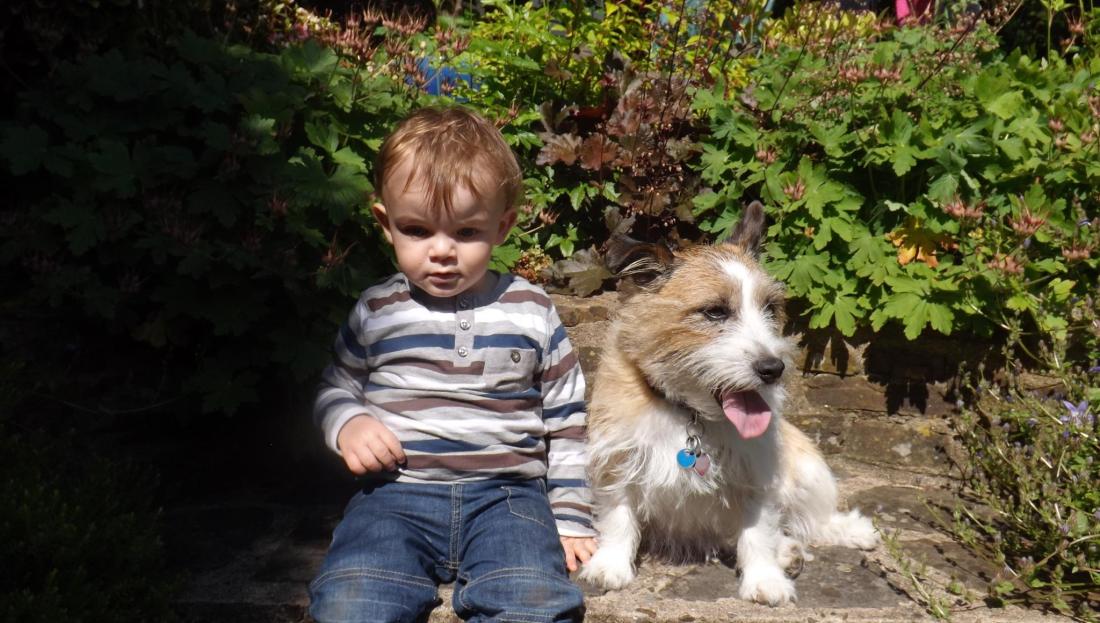 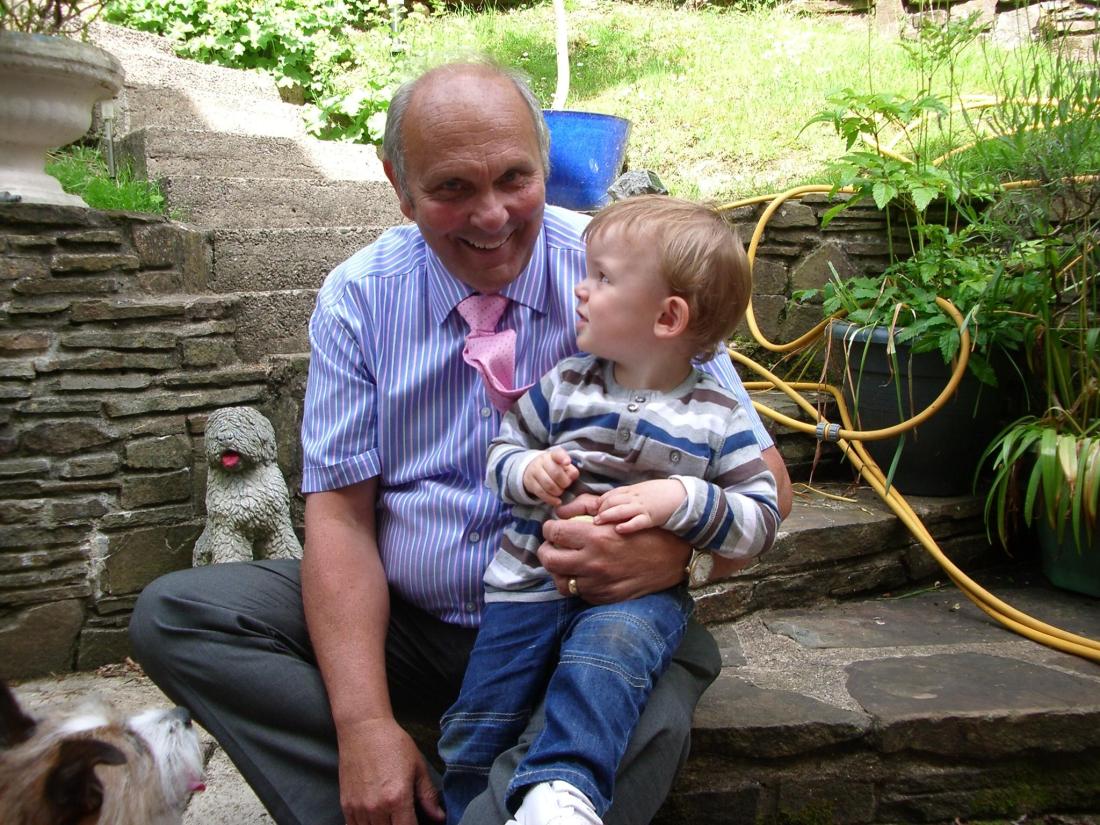 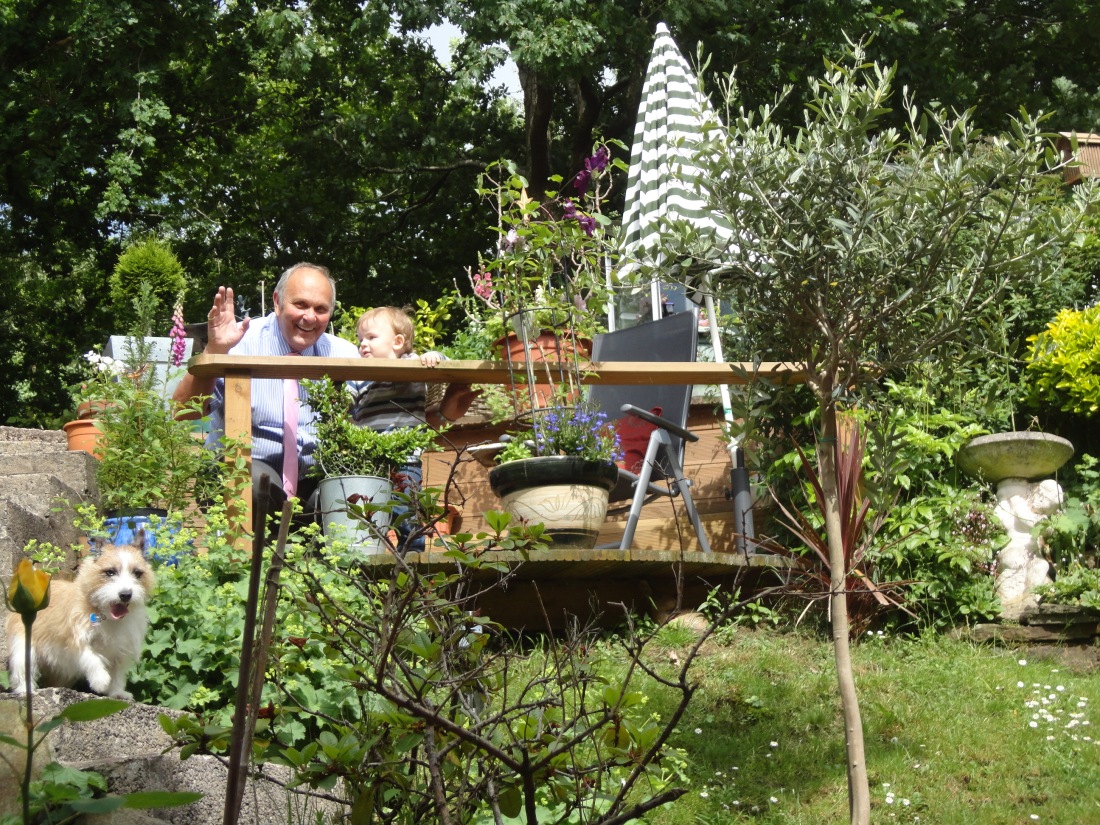 Soon it was time to go home, so I carefully placed Alfie’s hair back over the egg shaped lump that was still on his forehead, so that his dad and mum wouldn’t notice and we made our way back down the A470. My little friend was totally exhausted and we barely reached the M4 before gentle snores coming from the back told me he was reliving his exciting day in Dreamland.

I glanced back at him and smiled, then I looked up and thanked God for such a cute little pal.