Bob the bear was a very special bear.

He lived in a drawer in an office. The office belonged to a lovely lady; she was the Headteacher of a school. Bob the bear lived in a school and all the children and the teachers were his friends.

He was a very happy bear. He liked having lots of friends. Do you like having friends? Bob does.

Bob the bear liked living in a drawer and although he was a bit squashed, he made himself as comfortable as he could. However, what Bob the bear liked most of all were the times he was taken out of his drawer, so that he could go on holiday with one of the children of the school. Bob loved going on holiday, he had been to many places all over the world.

One cold November day Bob the bear was taken out of his drawer and given to Mia and Millie.  Mia and Millie were going to Disneyland. Bob was very excited. The Headteacher told Mia and Millie to be very careful that Bob did not get wet. It is not good for Bob’s fur when he gets wet.

Mia and Millie promised that they would take very good care of Bob.

He was taken home in Mia’s bag, it was a lovely bag with a picture of Anna and Elsa from Frozen on the front. Bob knew that Anna and Elsa lived in Disneyland; Bob was looking forward to seeing them.

Bob went to Disneyland in Mia and Millie’s car. They went on a big ship. The ship was called a ferry.

Bob did not feel very well on the ferry. He had to lay down.

When they arrived in Disneyland Mia, Millie and Bob were very excited. 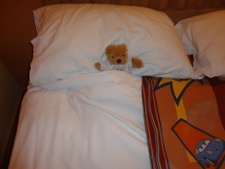 Bob had a bed of his own and he was very comfortable.

There was a picture of Lightning McQueen on his bed. Bob was very happy; Cars was one of his favourite films. That night Bob had a lovely dream that he was meeting all the characters from the film. It was a lovely dream.

When they went to breakfast, Bob wanted to help Mia and Millie get their cereals. He tried hard to turn the wheel but he found it was too hard.

Bob did not have cereals; he knew that the Headteacher like him to eat ‘healthy’ food, so Bob had fresh fruit for his breakfast. He liked having fresh fruit and he cleared his plate. Bob wished he was back in school so he could have a clean plate award – then he remembered he was in Disneyland and he was excited again and soon forgot about his clean plate sticker. 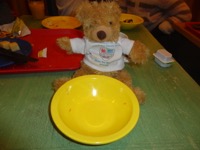 He also had a glass of orange juice for his breakfast. He knew that orange juice was healthy. Bob was such a good bear.

It was soon time to go into Disneyland and Bob was so happy. There were so many exciting things to see as they walked to the park.

When they got to the gate, he put his own ticket through the scanner. The lady on the gate was very kind. Bob liked it when people were kind to him, he was such a small bear.

Bob was so excited to be in the park! There were so many things to see and do. He thought he would burst. 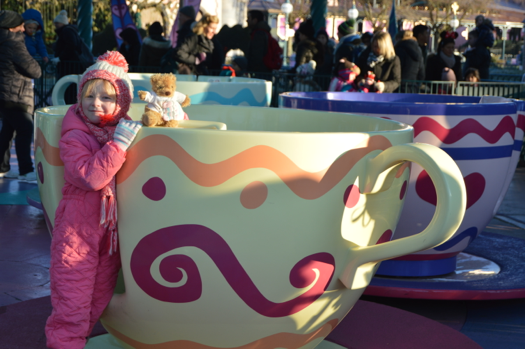 Bob like the teacup so Millie let him have two goes! Bob was happy – he thought Millie was very kind.

Next Mia and Millie showed him the sword from the story of King Arthur. 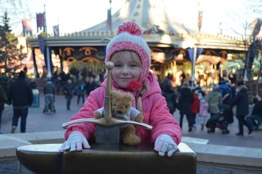 In the story, the person who pulled the sword from the stone would become king. At first Millie helped Bob pull the sword out. It moved a little bit and Bob thought he would like to pull the sword on his own. Millie let him but it was no good, Bob was not strong enough.

Millie smiled at her little friend he was such a brave little bear. He was such fun. Where would Mia and Millie take him next? He soon knew the answer.

When Bob the bear saw Sleeping Beauty’s Castle his eyes nearly popped! It was very beautiful and Bob thought that Sleeping Beauty was very lucky to live in such a lovely place as this. Bob wondered if there was a drawer in the castle he could live in.

Near the castle was a huge Christmas tree and Bob thought it would be fun to sit with the presents.  Mia and Millie were very careful not to leave Bob here at the tree.

He was so happy and thought that Disneyland was just about the best place he had ever been and what made it even more special, was that he was spending time with such lovely friends who loved him and cared for him. 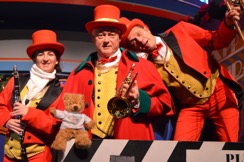 Next they passed a jazz band who were playing some lovely music. When they saw Bob, they stopped playing their music and asked Bob if he would have a photograph with them. He thought that this was a great idea. Bob loved music and one day – if he ever moved to the Juniors he hoped that he could learn to play an instrument

It was nearly the end of the first day and Bob decided he would like to ring his Headtecaher just to let her know that he was fine and that Mia and Millie were looking after him so well. There was no answer. Bob was sad. 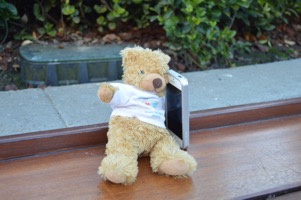 That night, when they were back in the hotel, Bob went to bed early. He knew that when he woke up there would be many more adventures to enjoy with his little friends. They had promised that the next day they would visit the Pirates of the Caribbean. Bob loved pirates, he was so excited that he found it hard to go to sleep. When he did, he dreamed of meeting a real-life pirate. 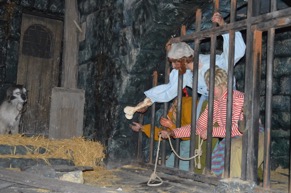