Max looked tired when he arrived this morning. He still had the lines of his pillows imprinted on his cheeks. He still smiled and we took a long time to gently prepare him for the day!

Max ate 3 Weetabix for breakfast! He ate slowly, enjoying it and watching the wood burner glowing in the fireplace.We had our adventure planned already – a day at Techniquest.

We had our adventure planned already – a day at Techniquest.

Each month this exciting Science Exhibition in Cardiff holds a Toddler Day. They call it Snowflakes and Sparkles – although I wasn’t expecting to see either.

We also received the good news that Max’s cousin Eli was also coming down, that would be great fun.

Max got dressed and prepared for the day. We set off just before ten for the short journey down to Cardiff Bay.

Techniquest first opened on 13 November 1986 on the site of the old British Gas showroom on the corner of Duke Street and St John Street in Cardiff Town Centre. There were 48 exhibits at that time, many of them were designed and built by Techniquest. The former showroom housed the centre for around nine months. Less than seven weeks after it had opened Techniquest had welcomed its ten thousandth visitor.

In 1988 Techniquest re-opened in a pre-fabricated building opposite the now demolished Welsh Industrial and Maritime Museum in Bute Street. The two buildings were removed to make way for Mermaid Quay.

They moved again in 1995 about 100 metres along Stuart Street to its present location on the site of the former Baileys engineering workshop which is now its permanent headquarters. The building, the UK’s first purpose-built science discovery centre, opened on 1 May 1995. It uses the steel framework of the original building which can be clearly seen on the photograph.

We parked up and waited for Eli to arrive.

Kids are free on Toddler Day. I asked for one OAP ticket but was rebuffed and told that all tickets were cheaper today, so I duly paid my £5.80, put on my wrist band and in we went.

Max absolutely loved it and so did Max. Every exhibit brought new delights. 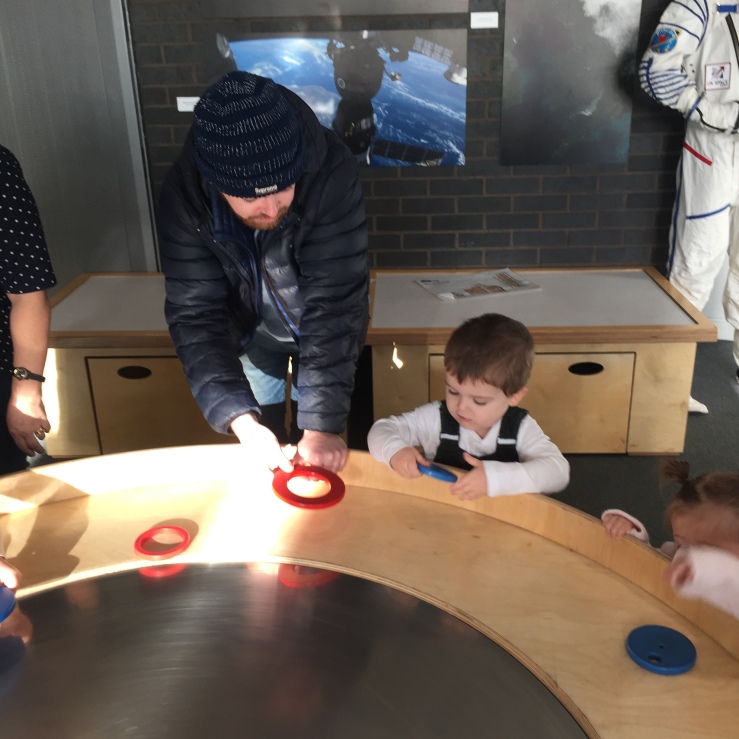 It was an effort to drag Max from one to another, he cried when we moved on but squealed with delight when he saw what was next it was truly wonderful.

We did stop at one place so Max could have a tattoo done. Unusually, he sat quietly while it was being done. In all fairness the young man who was doing it was really gentle and kind. Max was fascinated! 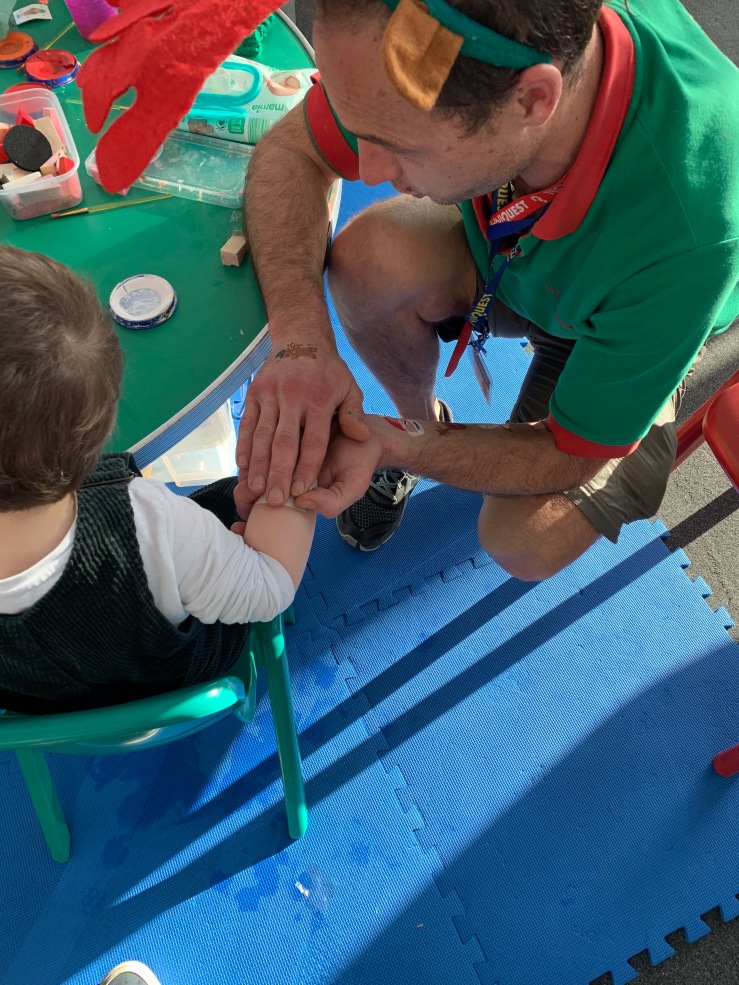 On our way round, we met several friends. Bibby was there with Oliver and Clive and Beatty French were on Grandparenting duty with their little ones. 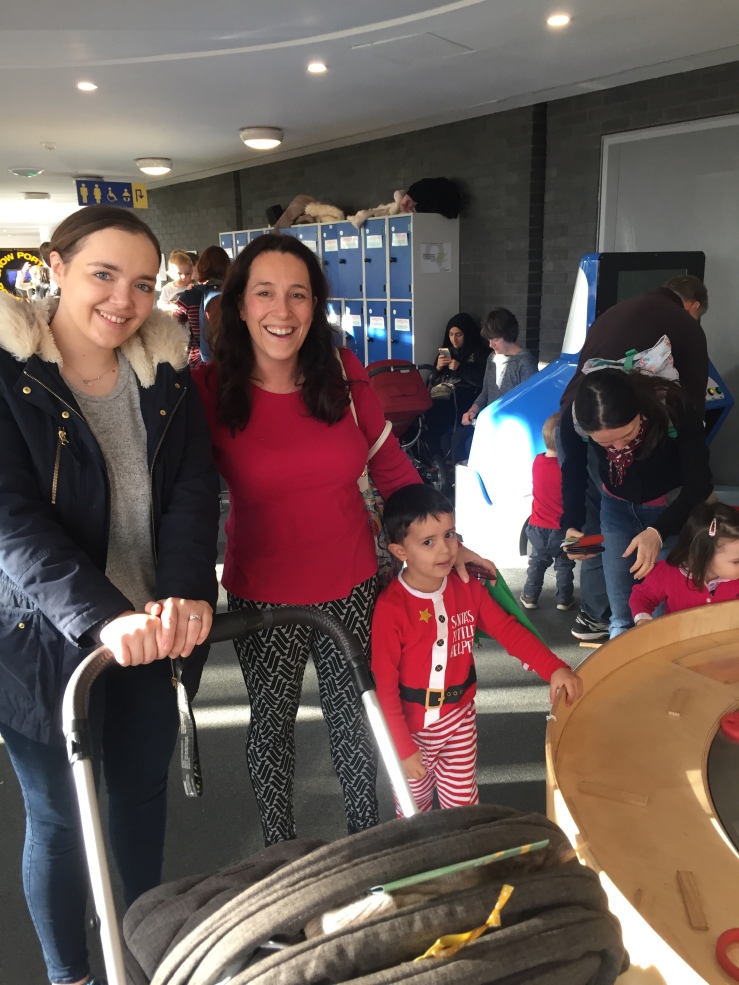 We had a great chat.

We even met with old Father Christmas…

Max wasn’t too sure though!!

We moved on and made our way upstairs to see even greater delights…. 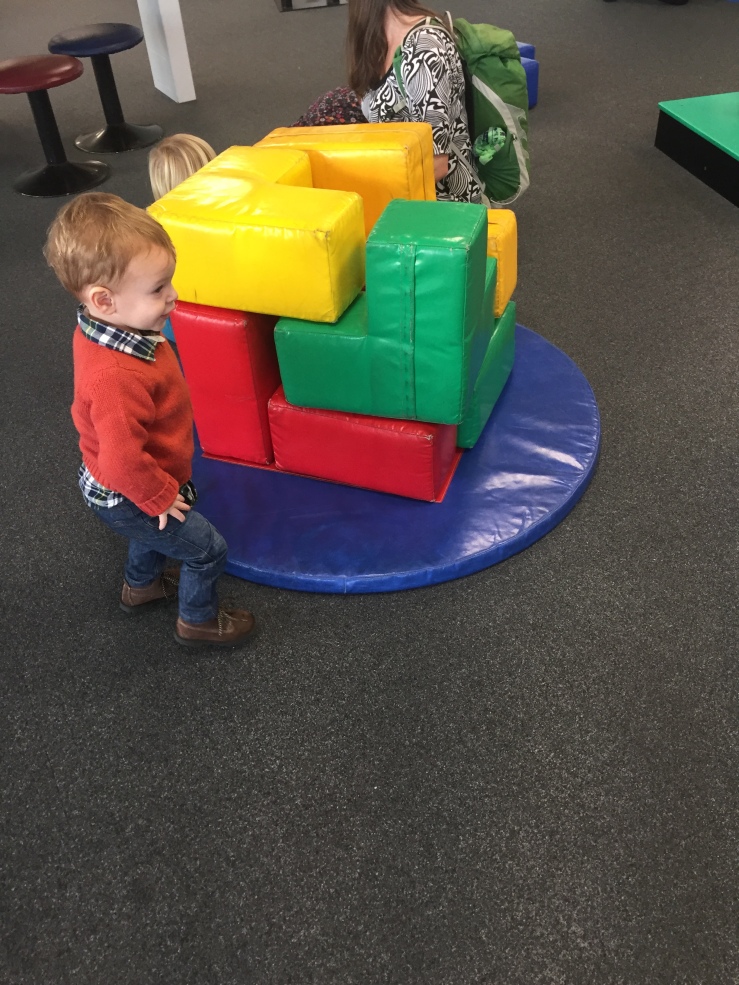 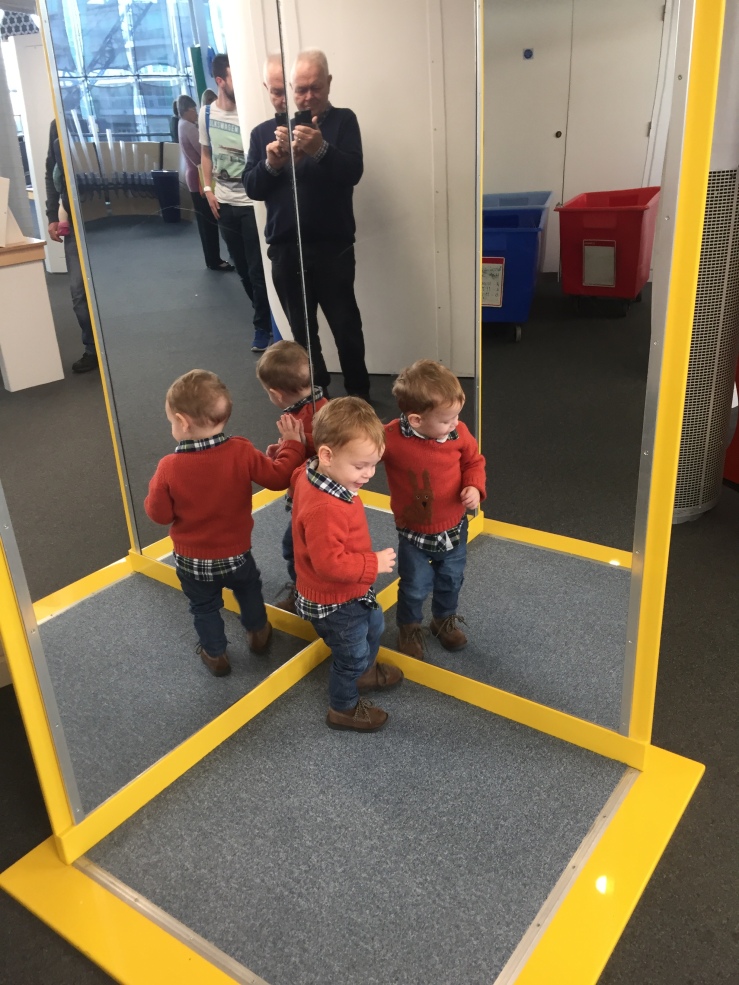 These two had no body to play with!!!! 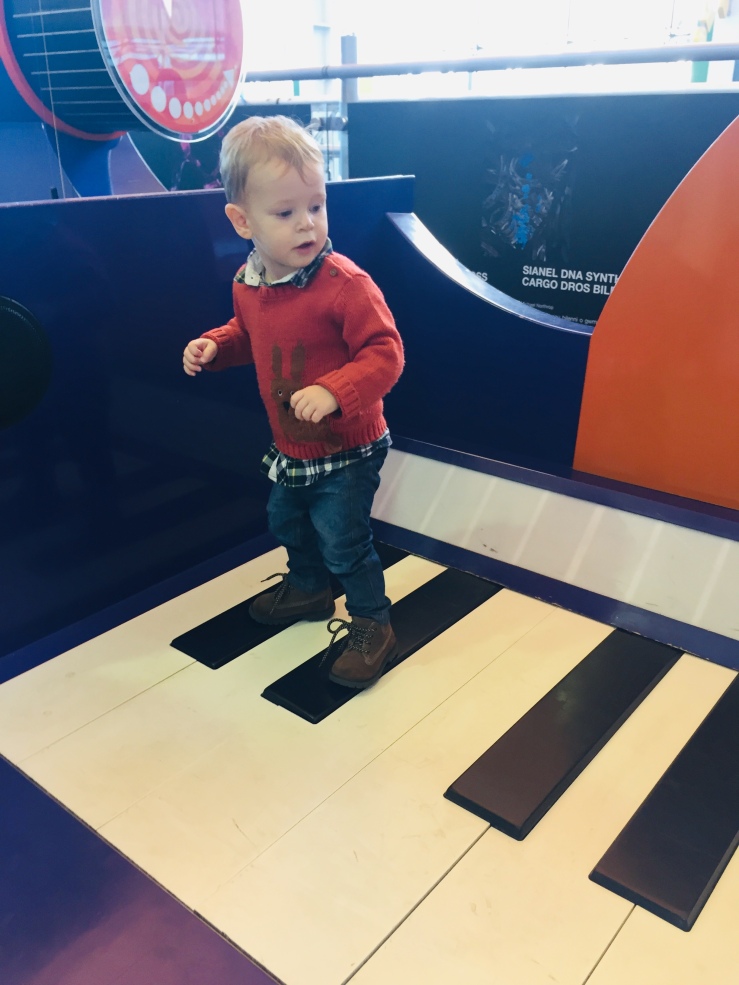 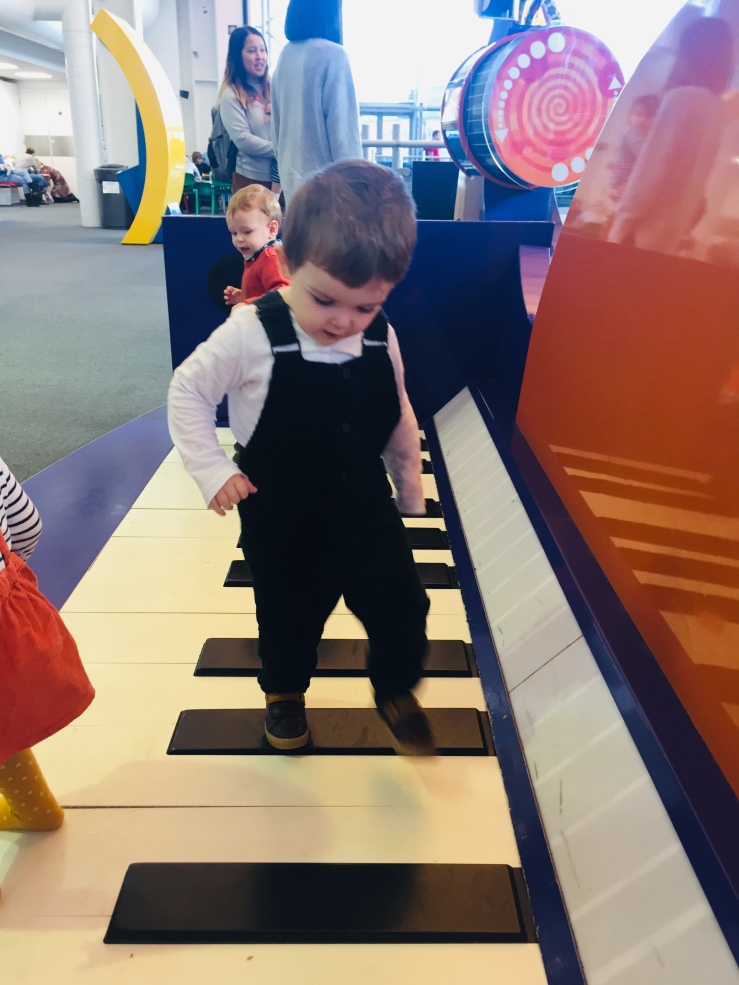 Max and Eli are such lovely friends as well as cousins…. 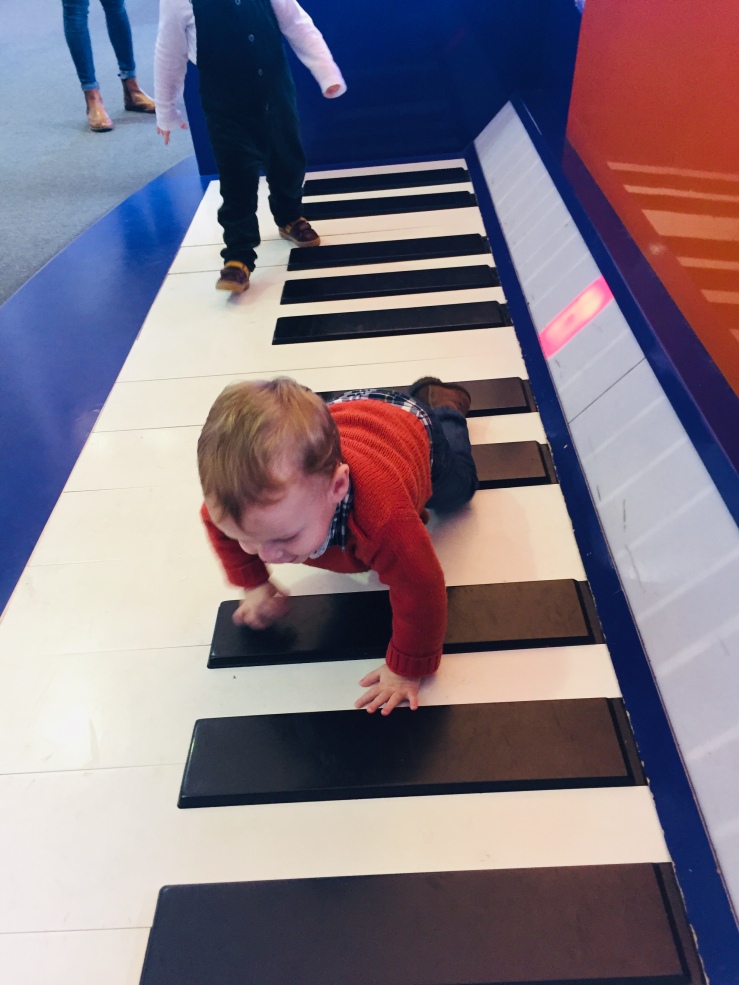 We even let the boys make a bauble for the Christmas Tree!!! 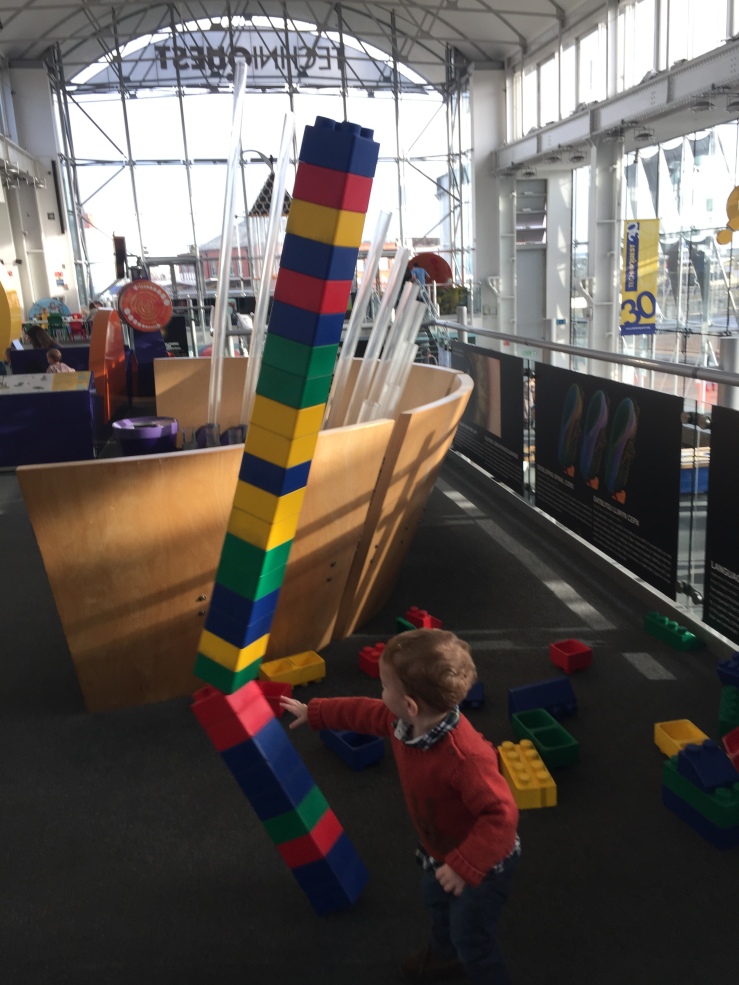 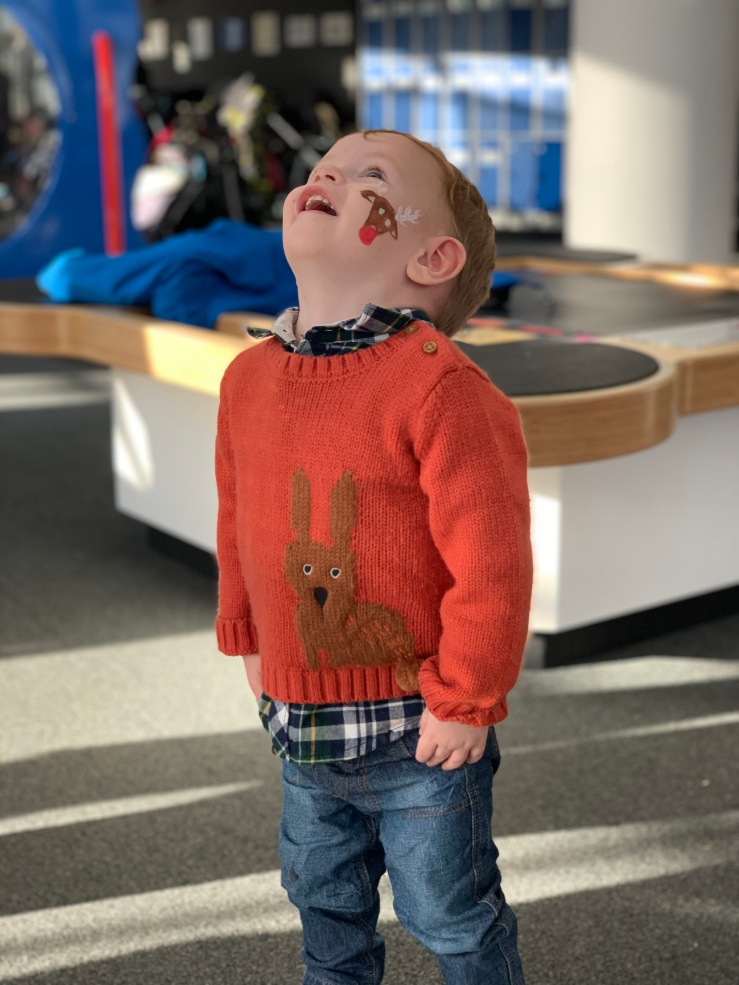 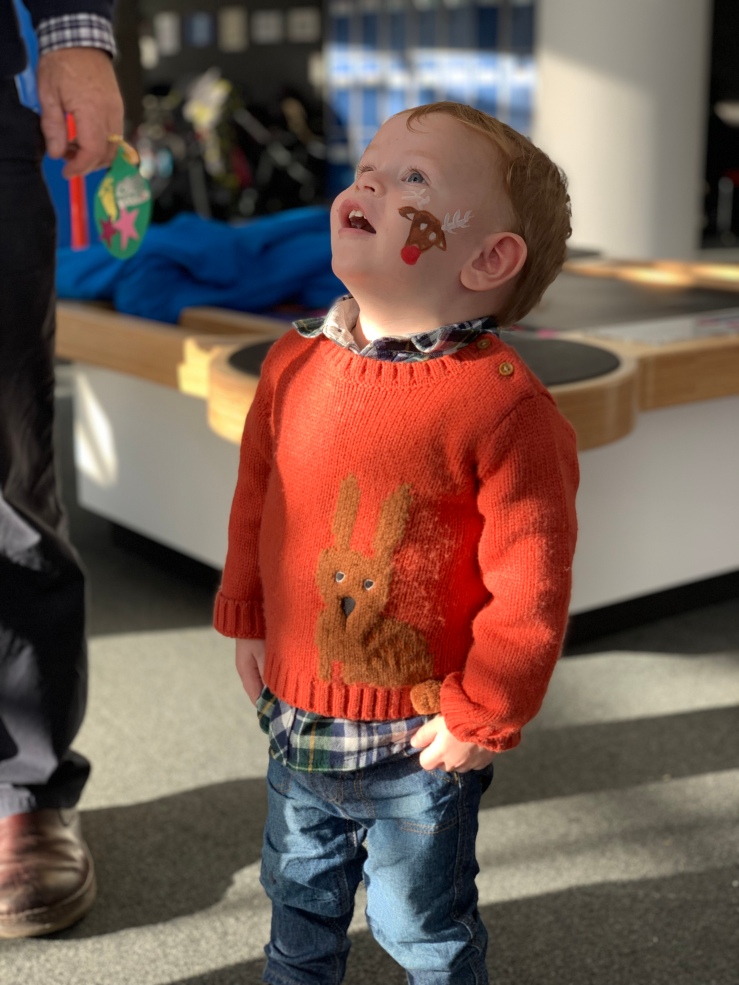 It really was a day filled with wonder…. and one of the greatest wonders of all….. 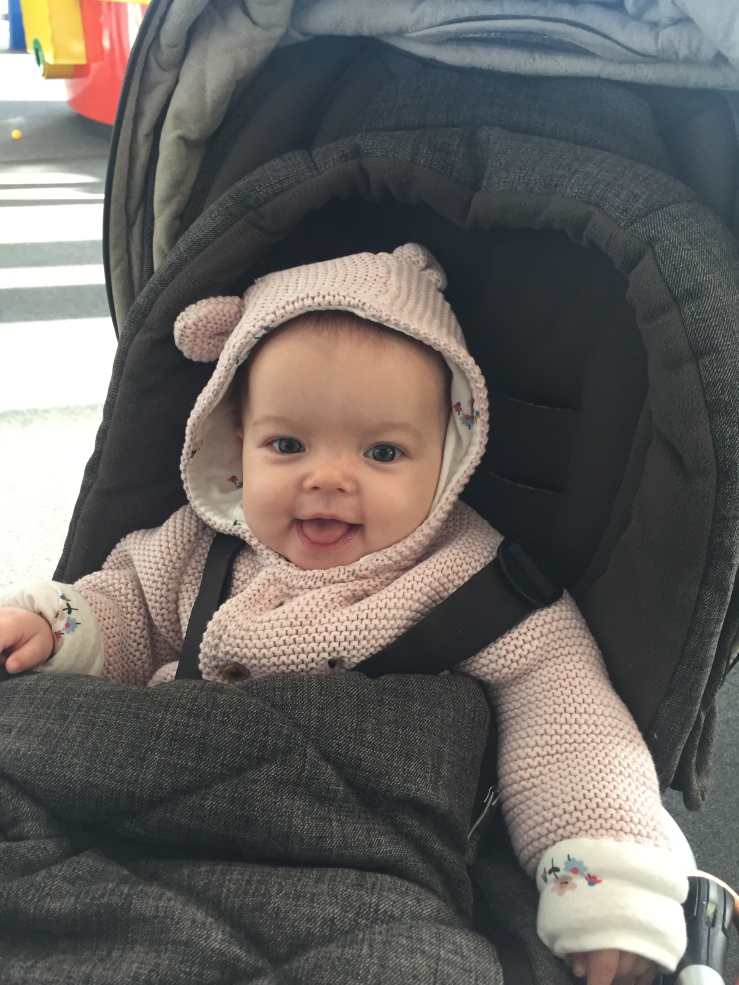 On the way out, Max even sat still to have a reindeer painted on his face.

4 thoughts on “Just Max and me – Adventures Day 9 – Techniquest.”