I find it hard to believe that this is the end of half term and apart from last week, I have looked after our little man every week. It has been a fun journey so far and I look forward to many more adventures in the weeks and months to come. When Alfie thinks of me I want him to think of fun times making ordinary days into adventures and realising that even ordinary days have the potential to make special things happen. Somewhere in the Bible it says, This is the day that the Lord has made, let us rejoice and be glad in it. I like doing that. I bought a slate plaque in an old ironmongers shop in Corwen while we were away last week. It says this.

Yesterday is history, tomorrow is a mystery and today is a gift, that’s why we call it the present.

Alfie and I were determined to enjoy the gift of this day and enjoy being together.

Alfie stayed over as usual last night and I was awakened by the sound of splashing water this morning and I realized that the lady of the house was bathing Alfie preparing him for the day ahead. I was quite taken aback when I walked blearily into the bathroom to clean my teeth to observe that the good lady was actually in the bath with Alfie. The water was up to Alfie’s neck and he was really enjoying the fun. Clearly, the water was not up to the neck of my favoured one and for a moment I didn’t know where to look…but then I thought I’ll be with Alfie all day I can look at him later. It was a pleasant way to start the day. I couldn’t really concentrate on cleaning my teeth properly though.

I was given the job of drying Alfie and we had a good little chat while he was practising his grins and smiles. The dear lady then dressed him while I set about preparing her lunch and the boy’s sandwiches. She brought Alfie with her when I took her to work and he was whisked off somewhere to be shown off.

We set out on today’s adventure quite late, as I had to visit the dentist and came back with a numb mouth sounding like a hideous drunk, slurring my words. I was hoping the boys in blue would not pull me over, as I am sure I would have been arrested for sounding drunk in charge of a minor.

I first had to fill up with petrol. My gauge was showing 2 miles to empty and I thought I might struggle to make St Mellons and back so I called into Tesco. I filled up and then wasn’t sure what to do… rush in and pay and hope no one steals Alfie or take him into the shop and waste time and annoy the boy with the constant in and out of his car seat. I thought I had it all worked out. I parked at the nearest pump and when I went to pay I walked backwards to the pay desk, not letting him out of my sight. Well, I tripped over the step and found it impossible to open the door of the pay desk with my hands fishing behind my back, so I gave up and went back to collect Alfie and he came with me to pay. I think I’ll write to Tesco and suggest they organize a crèche so that harassed grampies like me can pay for their fuel while some CRB checked person looks after the kids…can’t see it happening though!

The adventure this week had been pre arranged as Alfie’s mum had requested I take him to meet her pupils and teachers in St Mellons. However, I realise that all work (being showed off) and no play make Alfie a dull boy, so I decided that on the way I would continue his Cardiff Education and introduce him to an important  – maybe the most important – part of what he needs to know about this great city and we visited Paget Street in Grangetown, home of the world famous Clarks Pie.

The shop was busy this morning and there was a queue almost to the door. The smell of that shop is captivating, much like the smell of a bar must be to a drunkard. I gazed lovingly at Frank Hennessey’s picture on the wall while I waited to be served. My turn came and I ordered two pies one hot and one cold. I didn’t buy one for the boy, I don’t want him to grow up into a boy that people could look at and say…Alfie ate all the pies…he must wait until he is a little; older to enjoy the delights of a Clarksie. The two old birds in the shop loved him though and when I asked for a photograph they both tried to claim they couldn’t use a camera; one dashed off to the window to take a Clarks pie baseball hat from their classy display and both complemented me for raising the boy in such a sensible way.

After leaving the shop I took Alfie to show him some of the places where I played as a child when I visited my nan’s house. I also showed him the house where I was born…no brass plaque on the wall for me though, just loads of happy memories. My nan was great. 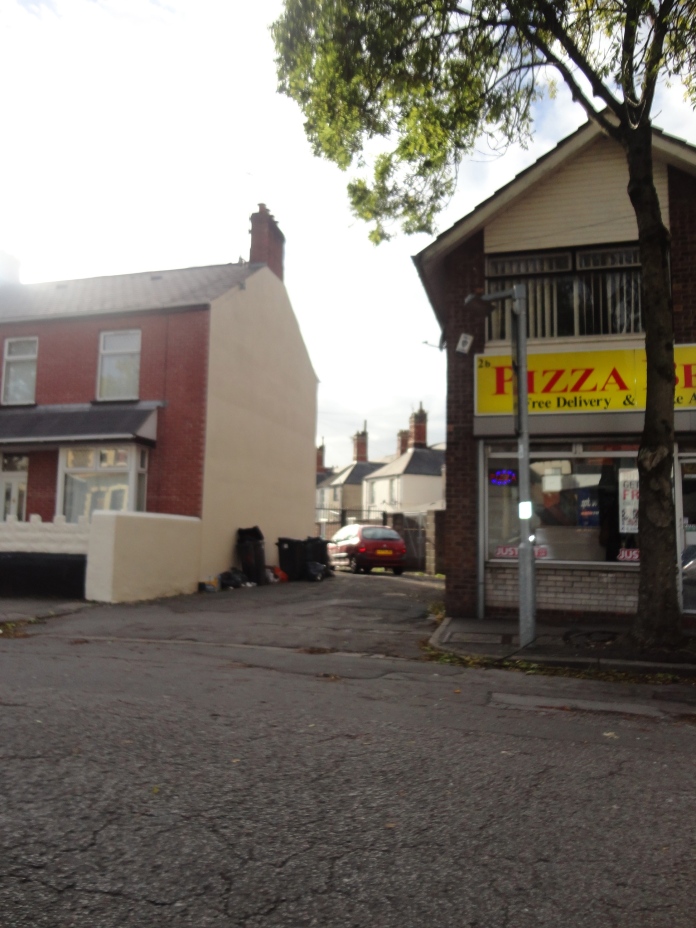 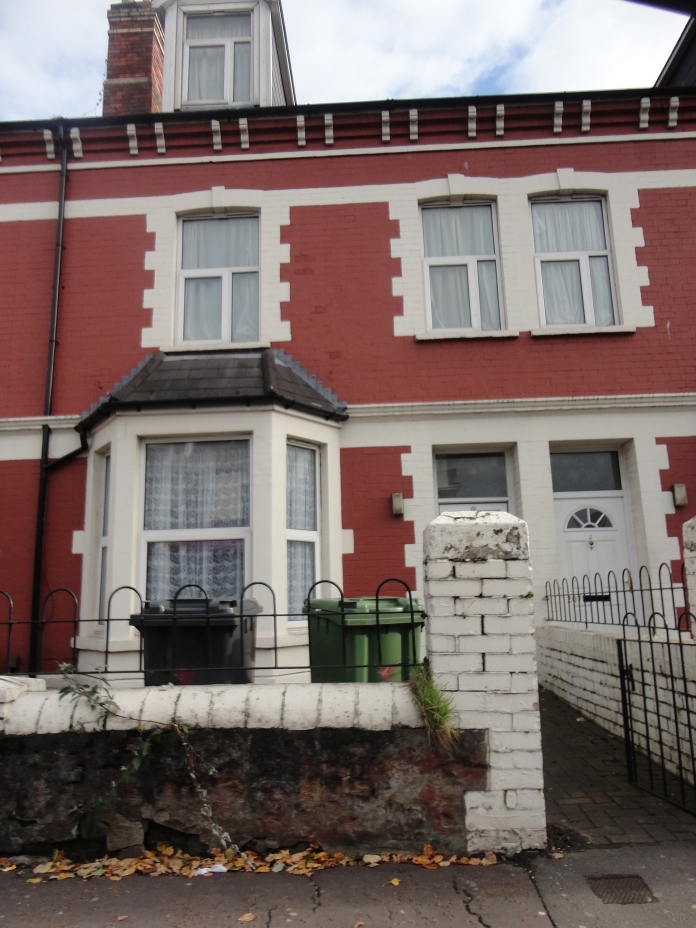 Then we drove to St Mellons and the smell was wonderful. I don’t know why so may drivers waste money on expensive car air fresheners…all you need is a hot Clarks Pie…. I was in heaven.

As I drove up Greenway Road I was faced with a dilemma. Alfie had obviously filled his nappy. I couldn’t take him into school smelling like that so I had to change him on the back seat of the car. It was a tricky operation but I think I got away with it and smelling much sweeter now I took him in to be shown off.

He was magnificent, smiling in the right places every time. He loved school and the small chairs and toys. Staff and kids alike thought he was wonderful.

Alfie and I had agreed to give the cold Clarks pie to the headteacher, thinking that if we treated him well the next promotion might come his mum’s way. Clarks pies have great power…watch this space. The Head was delighted and was halfway through it before we reached the door of the office! I can’t help thinking that it needed more respect, like an old vintage wine …looked at, sniffed for a bit before tasting in very small bites.

I was proud of Alfie and proud of his mum too.

At the end of lunchtime we popped into his mum’s classroom to meet the children who again adored Alfie. While his mum was addressing the pupils, I took refuge on a nearby metal filing cupboard…bad move! After a while I had this sinking feeling and had visions of me going base over apex in front of these six year olds. I shot up just in time but the cupboard was twisted and dented. I felt terrible mostly because the cupboard was personal property not the property of the council.

I left shamefaced and embarrassed, thinking maybe it was me who had eaten too many pies!

When I got back to the car and opend the door I gasped, the smell was rank! The old dirty nappy had been fermenting for the last hour and a half. Using Alfie’s coat as a fan I tried to divert some fresh air into the vehicle. When I felt it was safe  and hygienic enough, I put Alfie in and followed. Then I saw my Clarks pie on the seat. I was starving. I could resist no longer. I began greedily devouring the pie in between gagging at the smell of the dirty nappy. Such is the power of a Clarks Pie. Today I actually set a personal best and only had one single trickle of gravy down the outside of my coat. I carefully scraped it off and ate it… far too good to waste.

I decide to visit Roath Park on the way home. I was keen to show Alfie The Lighthouse at the park, that remarkable reminder of the fact that Scott of The Antarctic left from Cardiff on his last fateful voyage to the South Pole. I parked quite near the lake and took our little man to the very spot where thirty-eight years ago I asked the lady of the house to marry me.

At first Alfie looked disinterested but as I explained this was where my adventure with the great lady had begun he started smiling and laughing, maybe he understood the significance of this hallowed spot or maybe it was the advancing group of geese and swans!!

It was too cold to walk far so we gave the lighthouse a miss and retreated to the car and headed for town. Great Aunt Bes had called with matters of utmost importance, which nothing could get in the way of. Her new phone had arrived and we simply had to meet her in the 3 shop to arrange to pick up a new Nano sim. Absolutely nothing else mattered! I know my place and the importance of such things and in no time at all we were in St David’s shopping centre purchasing the aforementioned article. I noticed Bethany look with disgust as we met, then I remembered the big gravy stain on my coat. Bother!! I looked round for a poppy seller… one of those would cover it!

Alfie and I then strolled to M & S to pick up some dollars for his dad’s birthday. Tonight Alfie is off to the USA to visit a friend of his dad and mum’s who is a marine and recently lost both his legs in Afghanistan. They have been collecting money to help Tim convert his car for disabled use… they are such caring people… I hope Alfie grows up to be like them.

On the way back to the car we popped into St John’s Church; I was explaining to the boy that this was the church where his great grandfather and great grandmother were married just after the war.

It was quiet inside and I got thinking how very sad I am they never saw our little miracle. They always believed God would send him – they totally believed during the years of heartbreak – but they were taken before seeing him. How they would have loved this darling little man. At the back of the church we stopped and lit a candle, it seemed the right thing to do. All Alfie will have is pictures to look at and the stories we will tell. I was blessed I knew them as my dad and mum. We left the candle flickering in the quietness of the church and I wiped away a tear before going back out into the cold. I bought a carton of cockles in Ashton’s before heading back to the car and making our way home. It had been a full day for Alfie and he was asleep before we reached Penarth Road. Later his mum would be collecting him and then they’ll be heading off across the Atlantic. I’ll miss the little fella….

Alfie has promised that he would write to me from America… I am sure he will. Have fun…  go adventuring with your dad and mum my little friend.

One thought on “Adventures with Alfie Day 7”