Are you going to Techniquest Toddler Day today? If you are please let me know. I would love to play with you.

Alfie and I decided to write this message on Facebook to two very special friends who, having read Alfie’s Adventures made a date to go along. Techniquest Toddler Days are held on the first Friday of every month.  Today was Pirates day… it sounded exciting! 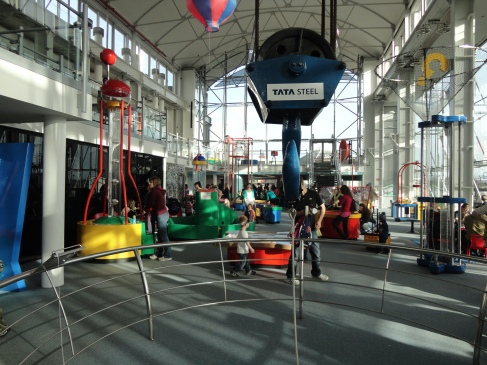 Alfie stayed over and didn’t wake until 8.00 a.m. just as the lady of the house was about to leave for work. She looked a bit envious, as we talked about what we might do today.

Over breakfast Alfie showed me a new game. It’s called ‘Grab the Porridge’. The rules are fairly simple; as your grampy is feeding you and looks away, you have to grab the spoon with the porridge on and hold as tight as you can… and when he turns away to collect a wet wipe you have to see how much of it you can spread over the tray of the high chair. It’s not all that enjoyable, I don’t think, but Alfie thought it was hilarious! I am sure he took too many goes as well.

While dressing him he showed me another new game. This one was called ‘Pulling Socks’. What you do is this…when your grampy has put on one shoe and sock and has started on the second you have to try and remove the first one before he notices. You earn points for speed and distance the sock and shoe are thrown. Have you ever seen Grampy Newberry go red in the face? Alfie has! 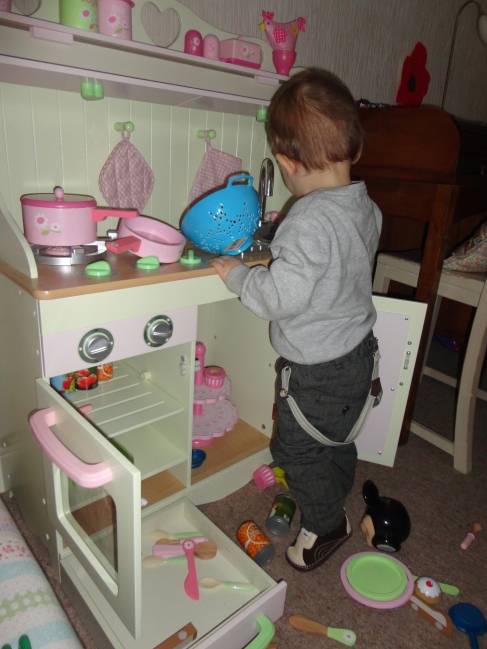 Before we left Alfie had a little session in the pink kitchen. He pretends he is Jamie Oliver and enjoys making me a cup of tea and some toast.

We left home shortly before ten and made our way slowly down to the Bay. We parked near The Coal Exchange in our usual place. A traffic warden smiled at me as I parked the car. It was the kind of smile a shark would give an unexpecting little minnow before it makes a tasty snack from it. I had no cash on me so could only afford the one hour free option. I could see the warden note it in her book before giving me a ‘see you in 59 minutes’ kind of smile.

We made first of all for Subway where we had decided to have breakfast. When we got there the Bay was alive with yellow vested individuals, all checking doors and speaking into walkie-talkies. Subway was shut and one of the fluorescent clad workers told me to come back in fifteen minutes. I was worried, breakfast finished at eleven, time was running out. So we strolled around The Bay. It was beautiful. Today was the first day of February and the sky was blue and it was mild. Alfie was wrapped up warm in his stroller. For weeks the weather had been abysmal, but today felt just a little tiny bit like spring. I thought of my friends in school and smiled.

We had such a great time – a little boy and his grandfather out walking in the winter sun. To all who looked on they were just two ordinary people, but we knew we were close friends, who went on adventures together and made ordinary days special. Alfie was singing.

When we got back to Subway things were back to normal and the assistant told me there had been special emergency training for staff. I hope they all passed. I ordered my bacon and egg Subway roll and a cup of coffee and paid just £2 for the privilege. That has got to be right. I normally pay more than £2 just for the coffee! Alfie enjoyed a biscuit, as he had already had his breakfast at the proper time. As usual he took a huge interest in every other customer that came in, especially a group of schoolgirls who made such a fuss of him. The way he interacted with them made me feel so proud. 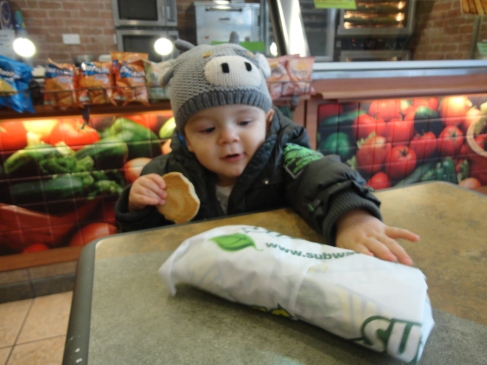 After Breakfast we strolled around the Bay again, before making for Techniquest.

I paid my entrance fee and proceeded into the mayhem of Techniquest Toddlers’ Day. I looked for Emelia and Asa but guessed I was too early, but I was delighted to see five very familiar faces…my day was made. It was Keri, Princess Mia and Angel Millie along with Krista and my lovely little friend Lily. I was made up – this was a totally unexpected surprise. On the way Alfie had fallen asleep, so I was able to play a little bit with the girlies. It was BRILLIANT. 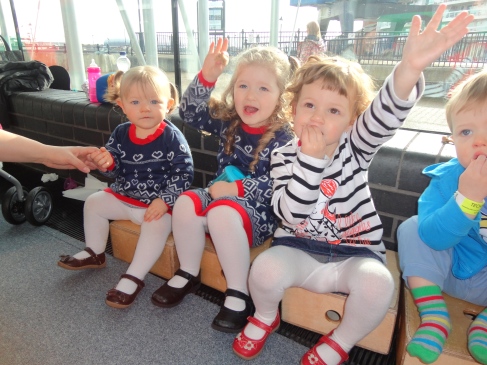 Eventually Alfie woke up and was excited about the day ahead. He just had time to play a while with his cousins before Keri left to take Mia to school. When we alone we set off looking for fun and we found it more or less straight away on the face-painting table. Alfie decided to be a pirate, the theme of today’s toddler day. 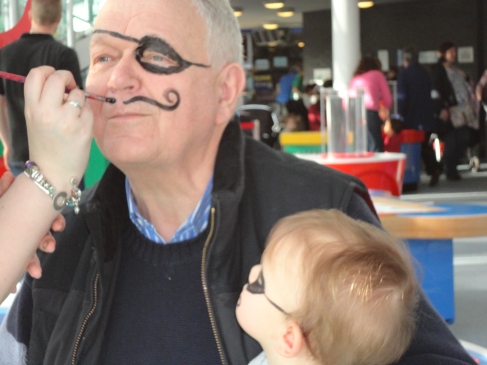 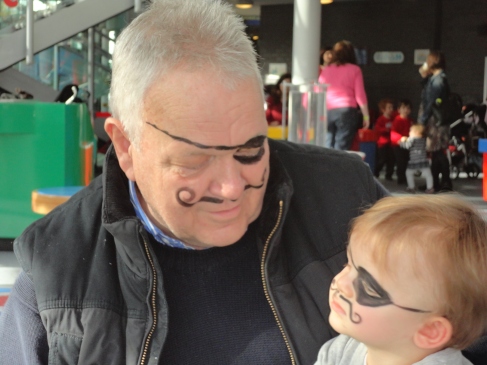 He sat brilliantly to be made into a real pirate…and then I asked to be done. The girl thought it was a real hoot and some of the young mums were laughing aloud. I enlisted the help of one to act as official photographer for Able Seaman Alfie and Jolly Roger. Avast Ye Landlubbers!

Alfie then had a go on several of the exhibits before playing with the giant Lego and having another go on the giant piano he had been on with Millie some weeks before. He kept making for one note in particular the C flat and I wondered if it was a sign that when he grows up he will be looking to live in a musicians apartment near the coast. We then moved on to make a real pirates hat. Alfie’s was superb, but I lost the courage to ask if I could make a hat for myself. I was tempted but then I remembered I am sixty-two! It would have gone so well with my face too! Never mind!! 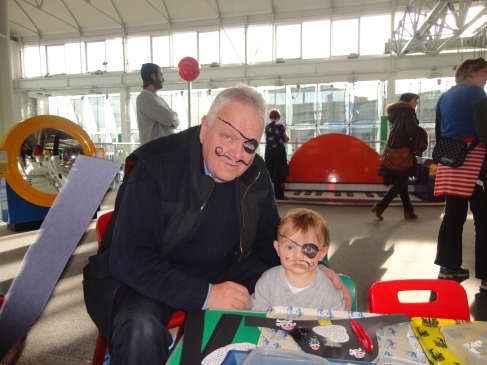 It was time or lunch by now so we made our way down to the café. The staff in Techniquest are just fantastic and as I walked up to the counter with Alfies food in my hand the assistant smiled and said… ”Thirty seconds?” even before I even asked, I like that!

As we sat down to eat, I met an old Glyncoed family. I was so pleased to see them, even though I felt a little nervous as I struggled for words. This family has just gone through the most unimaginable tragedy with quiet dignity and I have enormous respect for them. They have just lost their son, a wonderful young man named Sam. I taught Sam some years ago now; he was the most fantastic pupil. Sam contracted Motor Neurone Disease despite being a very young man. He battled with it for two years before it took him. I cannot understand how the family have coped, but they have and in doing so have inspired many with their strength and courage. They were with their daughter, Sam’s sister, and their grand daughter a beautiful little girl called Poppy. I looked at her and could only think how having this precious new life would have helped them come to terms with the loss of Sam.

We sat on the same table and fed the little ones and I was sad when they left us.

Alfie finished his lunch and was ready to explore further. We had a little walk around but still could see no sign of Emelia and Asa.

Eventually we left and as I was walking across the car park I realised I had forgotten to pick up my complimentary drink. We turned back and as we re-entered I was struggling to find the coloured band I was wearing which shows I had paid. The guy on the desk burst out laughing and told me that he didn’t need to see the band as looking at my face was proof enough!

I remembered I was Jolly Roger! Silly me!

We met Asa and Emelia outside as we were leaving. Asa had an appointment, which had gone on longer than expected. We promised to meet up again soon. I was sad we missed them, but I knew they would have fun, just as we had done.

After Techniquest we headed for Penarth and a visit to Nana Muz. We caused a riot in the home; all the staff were popping in to see the fat, jolly pirate and his little pirate lad. Beat enjoyed our visit and loved the family calendar we took in. She is a great lady and would have loved Alfie had her mind not been cruelly taken from her. Still she appreciates seeing the little ones who are so good at going in to visit.

We made our way home and greeted parents, Aunt Bes and finally the lady of the house as they came home and burst out laughing at the pirates!

I am so glad my little friend and I can bring a little bit of happiness into the lives of those we meet each Friday.

Ahoy there me hearties!!

Adventures with Alfie Day 14 is dedicated to the memory of my old pupil Sam Hully and his remarkable family.

One thought on “Adventures with Alfie Day 14”